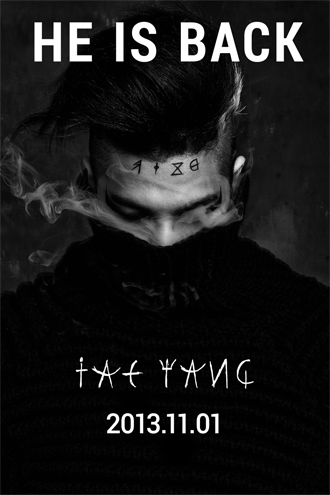 Taeyang of the K-pop group Big Bang is finally coming back with a solo release, three years after his last album.

There’s no title yet, and no details save for a date, Nov. 1, which was posted online by his agency YG Entertainment.

The agency also released a teaser image of Taeyang, with the singer covering most of his face in a black turtleneck sweater, his eyes down, and a line that reads “He is back.”

“The change of his hairstyle and the calligraphy inscribed on his forehead [in the image] is raising anticipation for how Taeyang will show more developed and different features than before,” the agency said.

Taeyang released a mini-album in 2008, “Only Look At Me,” followed by “Solar” in 2010. “Solar” was one of the first K-pop releases to be made available on iTunes, where it charted on the R&B charts in Canada and the United States.