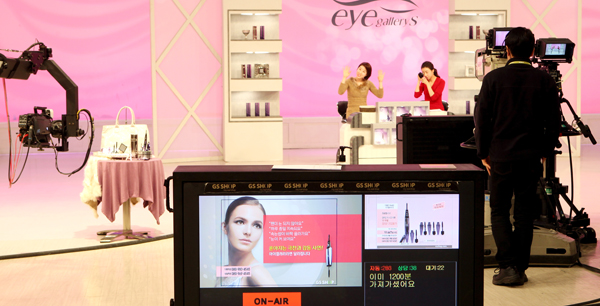 A home shopping host demonstrates a brand of mascara at the studio of GS Home Shopping in Yeongdeungpo District, western Seoul. [JoongAng Ilbo]

There’s a beep and a blinking sign that reads “3 million sold,” causing the home shopping host, who had been demonstrating a silver ultrasonic ion face massager, to gasp.

“I can’t believe it,” said the bubbly Kim Hyun-woo, a popular host at CJ O Shopping. “You should hurry up or else. We may run out at any minute.”

It was 11 a.m. on a Saturday morning and the home shopping program was urging viewers to quickly dial the toll free number to order a Merbe Ultrasonic Galvanic Ion Face Massager - “only 23,500 won [$22.15] a month for 10 months, without interest.”

But then Kim’s smile vanished as she said, “You know why I can honestly say to you that you won’t suffer a loss buying this product? It’s because I know that your skin will look different.”

The duties of home shopping hosts go beyond just selling a lot of different products. They also need to interact well with their guests, demonstrate how the products work and constantly keep talking, ceaselessly pushing people to buy.

Sometimes, home shopping viewers, especially women, say they get “hypnotized” by a host’s silver tongue and end up purchasing products they don’t really need; of course, they then blame the host for “seducing” them.

But how much responsibility does a home shopping host really bear, especially for products that prove to be faulty?

Most of the time, viewers blame manufacturers for shoddy merchandise. But the recent controversy over an American skin care cream accused of being dangerous is changing that equation, as irate viewers have turned their ire, not on the cream’s maker, but on host Jeong Yoon-jeong, 38, who sold the product. 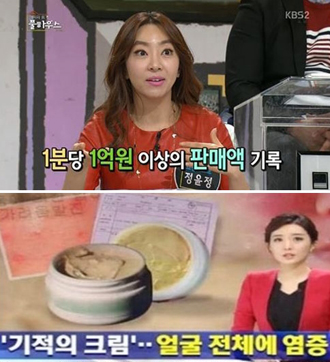 Jeong, a mother of two children, is a home shopping veteran of 12 years. She’s known as a home shopping guru and has set records for her ability to convince viewers to part with their money at record speeds. She’s pulled in about 100 million won in just minute and 2 billion won in a two-hour broadcast.

Last year, Jeong was selling Mario Badescu’s Healing Cream, a “magic cream that works wonders,” she said, recommending it for being “lightweight and oil free” and made with “natural botanicals.” The product was sold in sets that included two 14-milliliter containers of the Healing Cream along with an Aloe Vera Toner, all for about 64,000 won depending on the day of the broadcast. On six shows from May to September, Jeong managed to sell all 34,575 sets.

“I’ve tried so many skin care products, but they have never worked on me, so I swore that I would never get fooled again,” said Kim Ae-ran, 34. “But when Jeong came on the show and said, ‘Trust me, you won’t regret it,’ I had to buy it. You know, she’s always right.”

“My husband, who never noticed my new hairdo, noticed my finer skin after only five days of using the Healing Cream. It really made my dreams come true, and I worshiped Jeong for introducing the cream to me.”

Unfortunately, it turned out Healing Cream’s “magic” also included steroids - hydrocortisone and triamcinolone acetonide - both of which are banned in cosmetics in Korea for being dangerous and addictive.

“Mixing steroids in cosmetics for daily use is unbelievable. It’s impossible,” said Noh Mi-ryung, a dermatologist at Yonsei University. “There are some steroid ointments or lotions that you can get at pharmacies without a prescription, but they include low concentrations of relatively mild steroids. The types that are in Healing Cream are not considered the mild types.”

When the Ministry of Food and Drug Safety announced it was banning Healing Cream in December, the shopping channel stopped selling the lotion and claims Jeong posted an announcement warning people not to use it (although there is no sign of that announcement on Jeong’s Web site now).

GS Home Shopping claims that the Healing Cream they sold in the first couple of months was steroid-free, as the importer Morefun brought in a version of the cream that was acceptable under Korean law. That was the cream that Jeong used and endorsed. However, the channel believes subsequent imports were somehow switched to the version that contains steroids.

Only in July, as media reports on Healing Cream and consumer complaints began to pile up, did GS Home Shopping step up its response. Jeong apologized on her Internet cafe and the network posted another announcement on its Web site saying it would call consumers who bought the cream and offer compensation for medical treatment.

But still, many shoppers say there were never called.

Finally, in September, after broadcaster MBC reported on the case, bringing the issue into the spotlight and causing consumers to grow angrier, the home shopping channel took action in earnest, calling the Healing Cream buyers more actively.

But as the controversy grew hotter, consumer action was not directed at GS Home Shopping or the cream manufacturer as much as it was at Jeong, who was suddenly accused of being a “betrayer.”

It was hardly the first time a product sold on a home shopping network went wrong. Non-stick frying pans turned out to have been made so cheaply that the finish came off after just a couple of uses. Fruit advertised as fresh and delicious arrived at people’s homes old and spoiled.

Typically, viewers just get mad at the channel. In this case, though, viewers grew angry at the host.

Many argued that Jeong was responsible because she had made so much money from selling the cream (like other hosts, she earns a commission from her sales). But the most serious accusation was that Jeong “broke the faith” that her fans had in her. Thousands of her fans left her Internet cafe and became “anti-fans.”

Around September of last year, people unhappy with the Healing Cream started posting comments on Jeong’s Internet cafe, complaining of side effects. But as the accusations mounted, Jeong said nothing until the cafe suddenly closed.

“I guess we all expected her to be concerned like all of us because she said she used the cream every day as well,” said a 35-year-old named Seo, who was a member of Jeong’s online cafe, adding that the shopping host “is usually so honest and forthright.”

According to Seo, the Internet cafe deleted all of the negative posts and comments about the Healing Cream, then reopened a month later, after kicking out everyone who had complained about the product.

Another customer, a 30-year-old named Park, said she used the Healing Cream for more than a year and is still suffering from side effects, including stinging in the cheeks and frequent facial flushing. When it was serious, she couldn’t go outside and suffered depression. Park said she heard about the steroids in the Healing Cream, but kept using it because she trusted Jeong when the host said there wasn’t any in the cream.

“Jeong went on her show and said not to bother her with complaints about skin troubles because skin products can cause different effects on different skin types,” said Park.

Park says that when she ran out of the cream and switched to another product, her skin grew red and itchy, but when she resumed using Healing Cream, those symptoms went away.

At first, she thought that was just proof of the cream’s effectiveness, but now she sees that it was actually a sign of an addiction.

“What upsets me is that Jeong lied to us fans,” said Park. “If she had used the cream every day like she said, she should’ve suffered from the side effects, but her skin is flawless.”

But GS Home Shopping says they’re responding to complaints as best they can.

“We are currently dealing with consumers case-by-case as the severity of their conditions are different,” said Hwang Gyu-ran, a spokesperson for GS Home Shopping. “We are making our best efforts to cover all of their medical expenses, but it’s difficult for us to compensate those who request [them] without any references or for emotional distress.”

When GS Home Shopping noticed the public anger growing against Jeong, it pleaded on her behalf in a press statement last month, asking the public not to blame her and saying “the company as a whole is responsible for the incident.”

“Jeong Yoon-jeong apologized to consumers and the victims through her Internet cafe right after the incident was broadcast in July,” said the company’s statement. “It is untrue that the home shopping hostess knew about the steroids in the cream. The importer, the home shopping channel and the Korea Food and Drug Administration weren’t aware of it. Jeong Yoon-jeong is a victim in all of this.”

The importer, Morefun, also posted a mea culpa addressed to Jeong on her Internet cafe on Oct. 2, apologizing for harming her reputation.

After taking a two-week break from her show, Jeong came back on Oct. 12. But the viewers remain split. While some encouraged Jeong’s comeback, insisting that the importer should have been at the center of criticism and not her, some fiercely denounced Jeong’s appearance.

“No matter what she says, I can’t trust her anymore,” said one viewer. “I switched the channel because I don’t want to see her anymore.”

Kim Hyo-seok, a former home shopping host and current head of the Kim Hyo Seok Show Host Academy says he feels badly for Jeong having to take the brunt of the public’s anger.

“Somebody had to take responsibility for the incident,” he said. “It should’ve been GS Home Shopping, but it failed to handle the crisis properly. Then it should have been the importing company, but it also failed. So all the ‘bullets’ hit the public figure.”

Kim says that Jeong’s celebrity status is what made her a target in the first place.

“She has a lot of fans who purchase many products just because it’s Jeong who’s selling it,” he said, calling the home shopping host position a “double-edged sword.” “If you use that sword well, you are a professional, but if you use it wrongly, you become a crook.”

Kwak Keum-ju, a psychology professor at Seoul National University, echoed a similar sentiment. “When people are damaged in some way, they look for someone or somewhere to blame,” said Kwak. “It becomes easier for home shoppers to blame the host because hosts are not only public figures, but they are the ones persuading consumers to purchase the products.”