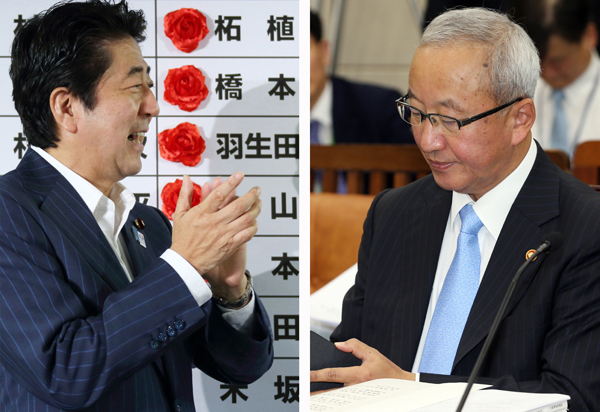 “The current economic team has proposed as many as 100 bills aimed at revitalizing the economy, promoting investment and creating jobs, but none of them have passed the National Assembly,” Hyun said at a meeting, “which has made it hard for us to feel tangible achievements.”

The minister has been claiming the economy would start improving from the third quarter, dismissing concerns and skepticism from experts and the private sector, but there is no sign of remarkable improvement in gross domestic product, private consumption, investment or employment.

Korea and Japan each had a new economic commander in chief early this year, but it seems like the whole world knows what Japan is doing to revive its economy because of “Abenomics,” while no one in Korea, let alone in other countries, is aware of what the government is doing or how the economy is faring.

Hyun has been the target of harsh criticism for failing to set clear and realistic goals, which politicians from both the ruling and opposition parties say has led the economy nowhere. The deputy prime minister position for economy was reinstated by President Park Geun-hye to focus on economic recovery.

On the other hand, Japanese Prime Minister Shinzo Abe has won public trust at home and positive evaluations from international analysts with the powerful package of monetary expansionary measures dubbed Abenomics.

Abe and Hyun have had approximately the same period of time at the helm of their countries’ economies, so how have they performed and what are the major differences between them?

Perhaps the biggest difference between the flagship economic policies of the two countries is that Abenomics proposed specific targets to the market and general public.

Abenomics consists of three arrows: releasing 134 trillion yen ($1.37 trillion) into the economy for two years, injecting 13 trillion won ($12.2 billion) into the public sector and initiating structural reform. For consumers, the administration pledged to raise the inflation rate to 2 percent.

Abe also gave the world a clear message at his inauguration in December: “The central bank should print an unlimited amount of yen as a measure to help fight falling prices.”

With such quantifiable goals, the Abe administration captivated its own people and overseas markets in the beginning, and that excited investors around the world.

Hyun’s appearance in late March as the new economic chief discouraged Korean consumers rather than helping them hold onto hope.

He slashed the government’s annual growth forecast as soon as he took office to 2.3 percent, saying, “The government is now less confident about economic recovery than three months ago, because economic indicators turned out to be worse than expected.”

Then the first step of the Park Geun-hye government to boost the economy was to earmark a 17.3 trillion won for a supplementary budget in April.

The idea wasn’t bad, according to experts, but many said the amount wasn’t enough to fuel the economy. Of the total, 12 trillion won was used to make up for declining tax revenue.

From April through September, the government announced a real estate policy package and held three presidential meetings on trade and investment promotion. However, none of them has born fruit. Major real estate policy measures, devised to ease housing problems and boost property transactions, are stuck in the National Assembly due to wide differences between the ruling and opposition parties.

Other than a goal to reach 70 percent employment, no specific goal has been set by the government to propel the economy to a higher level. The employment goal was set in June as part of an effort to create jobs, but most experts say it is unrealistic.

“Including the governor of the Bank of Japan, the Japanese government sent the public a clear message from the beginning that its economic authorities would tackle the decades-long recession,” said Sung Tae-yoon, an economics professor at Yonsei University. “But the Korean government had neither a clear message nor leadership. The deputy prime minister for economic affairs left people to wonder what the government was doing.”

Where is it headed?

To understand where the Korean economy is heading requires listening carefully to what the government says.

For the past 10 months, the Ministry of Strategy and Finance, a major government branch in charge of economic affairs, has been saying that the short-term goals for this year are to revitalize the economy and manage risks. In the long term, a broader goal of the Park government is to establish a creative economy to help secure future growth.

“It is pretty clear, we have been saying all the time that revitalizing the economy and risk management are top priorities,” said Choi Sang-mok, policy adviser to Hyun. Choi was the director-general of economic policy until September.

“Some may think of content or cultural stuff when we say creative economy, but actually it means discovering new areas of potential growth,” Choi explained. “The public might not grasp what the policies are largely because they are not as simple as those of Japan or the former Lee [Myung-bak] administration.”

The government official also pointed out a hidden meaning in current policies.

“The most important idea is to realize a paradigm shift from a catch-up economy to a leading economy,” Choi said. “The Korean economy has always been busy catching up to advanced economies, but now it is time for us to lead others. In this regard, we need stronger risk management.”

Kim Cheol-joo, director-general of economic policy, said the government is going to use fiscal measures next year and fiscal soundness will be an important foundation for the Korean economy.

“The role of fiscal policy will be greater next year, which means managing fiscal health will also be important,” he said.

Many analysts worry about recent sluggish growth, saying the economy is underperforming.

Annual GDP growth hovered around 2 percent for the past few years, far below the potential growth of 4 percent.

Japan’s growth is about to surpass its potential rate, 0.8 percent. The OECD forecast 1.6 percent growth this year.

“Not even the potential rate has been lowered to 3.9 percent, which means the economy’s capability has been significantly undermined,” said Kim Dony, chief of the policy division at Hyundai Research Institute. “It is crucial to raise falling capacity by discovering underlying factors in the economic structure that hinder further growth.”

“Above all, we need to empower Hyun’s economic team to move forward,” he added. “It is too early to criticize the deputy prime minister for poor performances.”

“The deputy prime minister should be able to persuade politicians rather than complaining that they are blocking the government’s policy,” said Sung. “That’s his role.”

As the deputy prime minister admitted himself, achievements of the economic team have been lacking.

“It is fine if measures are not too powerful, but we need measures a little stronger than we have now,” said Sung. “The government and monetary authority need to have a policy shift. It is also important to let the public know the government will block further recession and execute the measures in a definite way.”

“I think the government has failed to execute short-term measures, making its vision for the economy more vague,” said Lee Tae-kyu, director of planning and coordination at the Korea Economic Research Institute. “Short-term and long-term goals should have been distinguished clearly, so people know where they are heading.”

Including the creative economy initiative, the government has publicized long-term goals as if they can be achieved in the short term, Lee said.

“It is doubtful those goals can be attained within the Park government’s term,” he said.

In the short run, Lee suggested the government needs to do more to promote investment.

“Unlike Japan, which won approval from the international community for its Abenomics, Korea remains quiet about its policies,” said a senior government official. “We need a double-edged policy that is both open to the global economy and defends our economy from external factors.”

The official pointed out it is difficult for Korea to use aggressive monetary or foreign exchange measures like Japan, since it is an open economy that is vulnerable to external conditions.

“We can’t depend on macro policies anymore,” said another government official. “Rather than adjusting monetary measures, foreign exchange rates and tax rates, we need to take microeconomic approaches like relaxing regulations on foreign investment.”

“The Park government hasn’t set a numeric goal, which means the government prefers quality growth to quantitative growth,” he added. “Whether quality-oriented economic policy will be effective remains to be seen.”