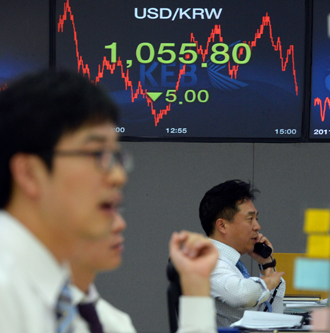 Dealers at KEB headquarters in central Seoul respond to calls yesterday as the won soars. [NEWS1]

Korean shares plunged nearly 1 percent yesterday as institutional investors off-loaded more than what came in from retail and foreign investors.

The drop was affected by overnight figures from the U.S. Labor Department that showed employers added fewer workers to payrolls than projected in September.

At the same time, the unemployment rate in the United States fell to 7.2 percent, which is the lowest level since November 2008.

The Korean won, meanwhile, rose to its strongest level since January as U.S. employers added fewer jobs than forecast, bolstering the case for the Federal Reserve to delay cutting back on its bond-buying stimulus. Government bonds gained.

Korea should closely monitor and prepare for changes in external conditions, including any stimulus reduction by the U.S. Federal Reserve, Bank of Korea Governor Kim Choong Soo said in Seoul yesterday. U.S. employers added 148,000 workers last month, compared to the 180,000 forecast in a survey of economists.

“The main news of the day was the worse-than-expected U.S. jobs data, which affirmed the consensus that the Fed taper will be delayed,” said Son Eun-jeong, a currency analyst at Woori Futures. “The won led the rally among emerging currencies as foreign inflows continued.”