Apple fights back in tablet war

Apple fights back in tablet war 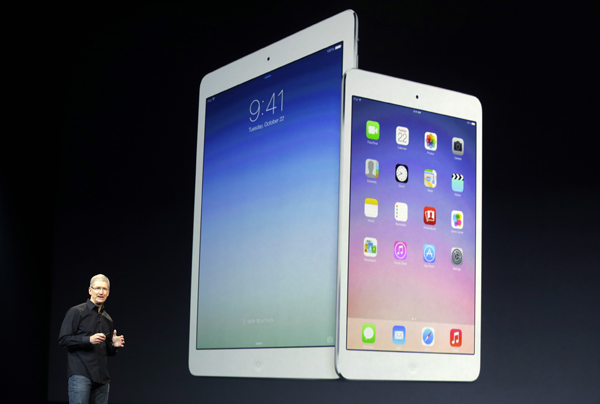 Apple CEO Tim Cook introduces the new iPad Air, which at 1 pound is 28 percent lighter and 20 percent thinner, and the first iPad mini with a Retina display on Tuesday in San Francisco. [AP/NEWSIS]

With indications that the market for smartphones may be nearing the saturation point, the world’s electronic giants are gearing up to flex their tablet PC muscle.

On Tuesday, Apple introduced the new iPad Air and a new version of the iPad Mini in hopes of regaining ground lost to Samsung Electronics and other rivals. Korea is not on the list of initial release countries that will get the new Apple tablets on Nov. 1.

According to Gartner, a technology research company, global shipments of tablet PCs will reach 184 million this year, up 42.7 percent from a year earlier. The Gartner data showed shipments will increase by 40 percent to 263 million in 2014.

In contrast, shipments of mobile phones are estimated to grow only 3.7 percent to 1.8 billion this year.

Android-based tablet PCs, including Samsung’s, have quickly taken the market share from Apple. Strategy Analytics data showed that Apple’s global tablet market share in the second quarter this year was 29.2 percent, the first time it has been below 30 percent. Samsung Electronics was second to Apple at 16.9 percent. 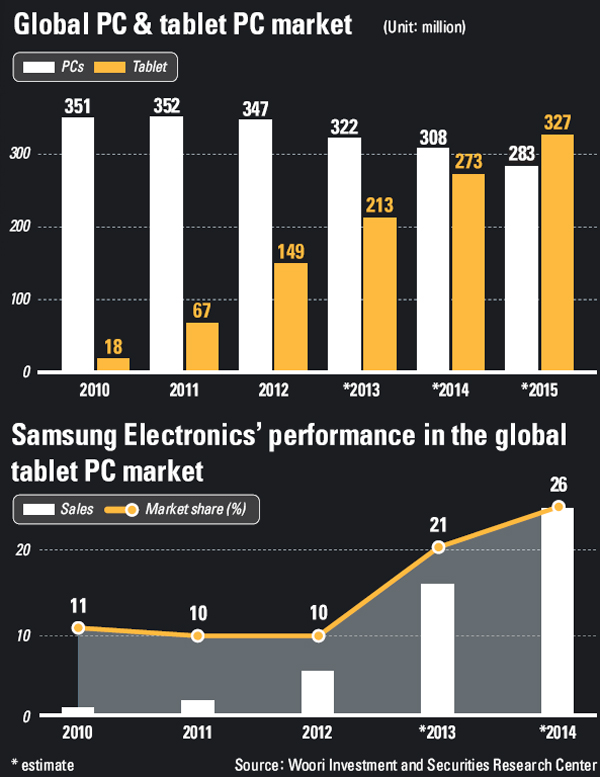 “This is just the beginning for iPad,” Apple CEO Tim Cook said while unveiling iPad Air at Yerba Buena Center for the Arts in downtown San Francisco. “We have been busy working on the next generation of iPad.”

Samsung sold 9.1 million units of the Galaxy Note 8.0 and 10.1 units in the first quarter. The company is seeking to continue that momentum with a domestic release of a 2014 edition of the Galaxy Note 10.1, which went on sale Oct. 10 in North America.

“We have strengthened our tablet PC lineups, and will continue to do so,” said an official at Samsung Electronics.

Samsung is targeting sales of 40 million tablet PCs this year and 70 million next year, which Lee Sei-cheol, an analyst at Woori Investment and Securities, said is a strong sign that the world’s largest smartphone vendor considers tablet PCs as the next growth engine. Sales of tablet PCs will surpass laptops and desktops combined by 2015, the brokerage estimates.

“They are expected to aggressively strengthen their marketing of tablet PCs,” Lee said, predicting Samsung’s market share will rise from 10 percent last year to 21 percent this year to 26 percent next year. “But many PC makers, including Lenovo, also are trying to carve out a share of the market, so we have to keep in mind growing competition.”

Samsung’s share of the Chinese tablet market was 11 percent in the second quarter, up from 6 percent a year earlier, while Lenovo’s market share on its home soil remained little changed at 8 percent, International Data Corporation said. Apple’s iPad accounted for 28 percent of the Chinese tablet market in the second quarter, down from 49 percent a year earlier. 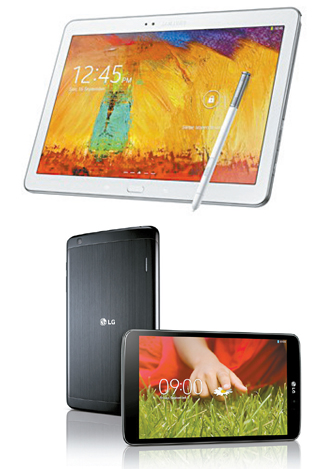 LG Electronics, still an insignificant player in the global tablet PC market, is aiming to turn the tables. Early this month, it released the G Pad 8.3, its first full HD tablet.

“We started the online sales of the G Pad 8.3 in North American market, and will release it in more than 30 countries within the year,” said an official at LG Electronics. “We are paying more attention to the tablet market.”

The iPad is Apple’s second-largest source of revenue after its flagship iPhone. Success of the new models will be critical as the Cupertino, California-based company attempts to reignite revenue growth.

Apple shares fell less than 1 percent to close at $519.87 in New York, leaving the stock down 2 percent for the year, compared with a 23 percent increase in the Standard & Poor’s 500 Index.

Apple is updating its products ahead of the lucrative holiday shopping season. As part of the lineup, the company released the iPhone the iPhone 5S and 5C last month.

Samsung, Asustek, Lenovo, Acer and others are offering devices starting at less than half of the iPad mini’s previous starting price of $329. Amazon.com introduced new Kindle Fires last month with higher-resolution screens starting from $229, while Microsoft and Nokia Oyj took the wraps off new tablets this week.

Cook alluded to the competition today, noting that “everybody seems to be making a tablet.” In a move to spur growth, Apple will also roll out the new iPad Air in China at the same time as other markets, said Phil Schiller, Apple’s senior vice president of product marketing. Apple also dropped the price of last year’s iPad mini model to $299.