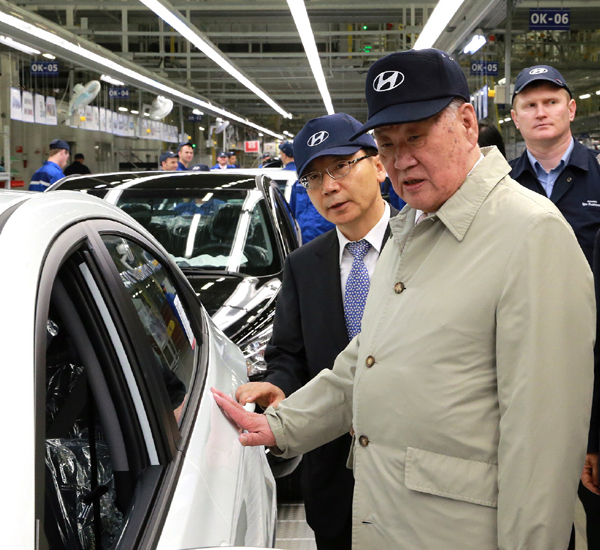 Hyundai Motor Group Chairman Chung Mong-koo inspects a car at the automaker’s plant in St. Petersburg, Russia, on Tuesday. Chung is visiting Russia, Slovakia, the Czech Republic and Germany on his tour of Hyundai’s facilities in Europe. Provided by the company

Hyundai Motor Group Chairman Chung Mong-koo urged the company to take preemptive measures in Europe with an emphasis on boosting brand value as he visits plants and sales headquarters.

While inspecting Hyundai Motor and Kia Motors’ factories and an R&D center, Chung had dinner with employees and their families.

“Hyundai and Kia are increasing market shares and fighting well in the market, but because of the perception of the brand, the speed of growth is faltering,” Chung said. “What’s important now is to make a leap in quality, and I want all employees in Europe to focus on achieving high-class quality, brand innovation, [and] product portfolio diversification for the future.” 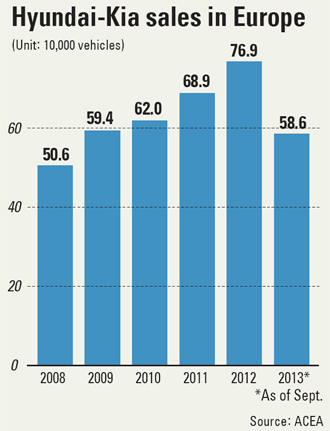 At Kia’s Slovakian plant in Zilina, which produces the Cee’d, Venga and Sportage, Chung implored workers to become the best in terms of productivity and quality.

The Slovakian plant produced 235,000 vehicles this year through the third quarter.

After visiting Hyundai’s Czech plant, which rolled out 228,000 models of the i30, ix20 and ix35 through the third quarter, Chung lunched with Czech Minister of Industry and Trade Jiri Cienciala and other government officials and thanked them for their support.

Before checking the two plants, Chung visited Hyundai’s Russian plant to encourage employees there. Hyundai and Kia in Russia sold 282,595 units this year through the third quarter, while its market share increased 1.5 percentage points year-on-year to 13.8 percent.

Hyundai said Chung visited Europe because the market is expected to recover slowly. During a meeting of overseas branch chiefs in July, Chung said the company should “find answers in the overseas market.”

According to the Korea Automotive Research Institute (KARI), the global auto market size this year is expected to grow 3.2 percent from 2012 to 80.3 million units thanks to growth of the United States and China. Demand in Europe has been going down for the past five years.

However, KARI predicts the European auto market will bounce back slowly after hitting the bottom this year. Next year, it is estimated to grow 2.5 percent to 13.87 million units.

Hyundai and Kia have been doing well in Europe so far. Last year, auto sales in Europe dropped 7.8 percent year-on-year to 12.52 million units, but combined sales of Hyundai and Kia increased 11.6 percent to 769,706 units.

Korean’s two top automakers are performing well this year, too. For the first nine months, 9.33 million vehicles were sold in Europe, 4 percent less than a year ago, but Hyundai and Kia sales reached 586,452 units, down just 0.7 percent. Their market share last year was 6.1 percent, but so far this year it is 6.3 percent.