Japan’s claim to Dokdo in video

Japan’s claim to Dokdo in video 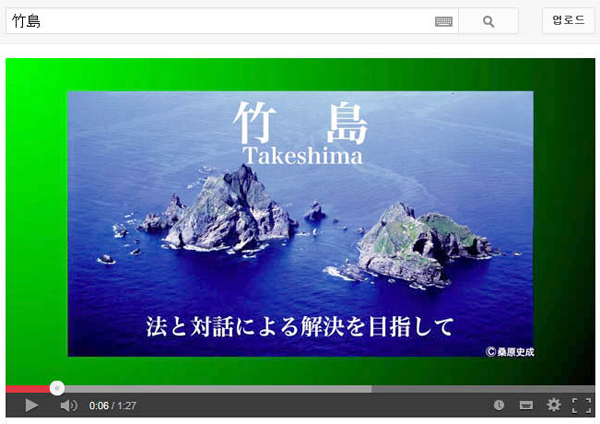 The start-up screen of a video that promotes Japan’s claim to Dokdo. Japan uploaded the clip onto YouTube last week. [Screen capture]

The Ministry of Foreign Affairs, which only discovered the video yesterday, said it will protest against it.

The video, which runs for one minute and 27 seconds, can be viewed on a YouTube channel named MOFAchannel, which is run by the Ministry of Foreign Affairs of Japan. As of yesterday afternoon, it had not been blocked by Korean censors.

The video starts with a narration saying, “Do you know about Takeshima?” (Takeshima is Japan’s name for Dokdo.) It goes on to make a series of unacknowledged claims alongside a link to the ministry Web page with detailed information.

The narrator says the Japanese government established sovereignty over the islets in the 17th century and that the United States rejected Korea’s request to force Japan to give them up when the San Francisco Peace Treaty between Japan and part of the allied powers was signed after World War II. The video clip also says Korea illegally took control of the islets in 1952, and Japan has proposed three times that the two countries bring the issue to the International Court of Justice. Korea has rejected that proposal.

Seoul’s Ministry of Foreign Affairs spokesman, Cho Tai-young, said yesterday the ministry is “lodging a strong protest against the Japanese government’s attempt at removing our sovereignty over Dokdo by spreading groundless claims over the Internet.” The ministry demanded Japan delete the video immediately.

“We hope the Japanese government realizes that such an unhistorical and anachronistic act of provocation serves as a crucial factor in blocking the progress in Korea-Japan relations and it should learn from past cases of other countries sincerely taking responsibility for historical mistakes,” the spokesman said.

Another ministry official said Japan has been “copycatting” Korea’s moves when it comes to the Dokdo issue.

“When Korea published a video on Dokdo, Japan came up with a similar one,” he said, “and when Korea hosted a forum on the islands, Japan followed suit.”

Late last year, Korea’s Foreign Ministry produced a video clip to be used for college classes and published a different video on YouTube in September to repeat its claim to Dokdo. The ministry plans to dub the video in seven foreign languages by the end of November.

With the launch of the Shinzo Abe administration late last year, the Japanese government has been stepping up its territorial claims. Right above the link to the video on Takeshima sits another link to a video clip about the Senkaku Islands, known as the Diaoyu Islands by China.

Tension between Japan and China has remained high due to competing territorial claims to the eight uninhabited islands and rocks in the East China Sea. Whereas China says the islands have been part of its territory since ancient times, Japan says it surveyed the islands for 10 years and erected a sovereignty marker that formally incorporated the islands into its territory in 1895.