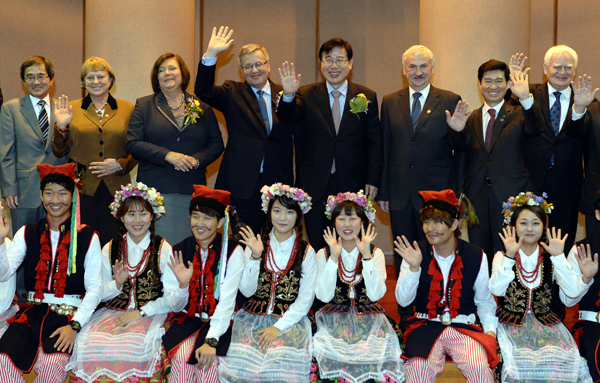 President of Poland Bronislaw Komorowski (top row, fourth from left) poses with Park Chul (fifth from top left), president of the Hankuk University of Foreign Studies, faculty and students yesterday at the school’s Aekyung Hall in Dongdaemun District, central Seoul, after giving a guest lecture to some 300 people. [NEWSIS]

Polish President Bronislaw Komorowski spoke to Korean university students yesterday, emphasizing the significance of cooperation between Seoul and Warsaw as a means to greater linkage to the European Union.

He also touched upon Poland’s role as a purveyor of democracy in a Communist Europe nearly a quarter century ago, adding that “the Polish experience may be [a] source of hope for many other parts of the world.”

Some 300 students, faculty and diplomats gathered yesterday for the president’s guest lecture at the International Student Center of the Hankuk University of Foreign Studies (HUFS) in Dongdaemun District, central Seoul. Komorowski is the first European president to make a state visit to Korea since President Park Geun-hye took office in February.

In his speech, he stressed the importance of political, economic and cultural cooperation among nations.

“The world is becoming a multi-polar world,” he said. “.?.?. Korea is the author of success in Asia. I am convinced that Polish-Korean cooperation may be a means for Korea [to foster better relations with Europe as a whole,] and with the entire continent of Asia.”

The two countries upgraded relations from “future-oriented partners” to “strategic partners” on this visit.

Korea and Poland are similar in their shared experiences, Komorowski continued, as the two nations have overcome war, invasion and division, which eventually led to economic and political success.

Komorowski recalled Poland’s democratic transition in 1989 from Communism and said that this proved to be an inspiration for “change in the entire central Europe.”

Poland had to go through a very painful set of reforms, including economic liberalization, he added.

Visiting the demilitarized zone (DMZ) separating North and South Korea the previous day, he said, brought back “all the emotions and energy [from] Poland” in 1989, as revolutionary changes led to the collapse of the Berlin Wall, a symbol of the cold war’s division of Europe.

“Poland opted not only for political transformation, but for the implementation of very difficult policies .?.?. Only years later we can see how much it means to be courageous, when you decide to go along the normal path of development,” Komorowski said, referring to Poland’s current economic success and active membership in the European Union and NATO. “The reforms were far-reaching. That is the secret of Polish success. They [have] paid back in the last 20 years.”

Komorowski was made an honorary alumnus of HUFS, which has the only Polish department, established in 1987, in Asia.

“It has grown over 27 years as the biggest Polish teaching institute, not just in Korea, but across Asia today,” said Park Chul, the president of HUFS, in his welcoming remarks.

HUFS has ties with five universities in Poland, including the University of Warsaw, Komorowski’s alma mater.