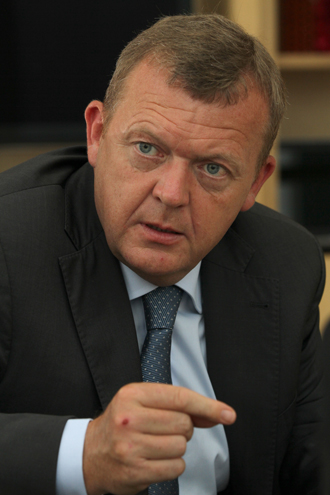 Following reports that the Danish head of the Korea-based Global Green Growth Institute had spent large sums jetting around and eating at fancy restaurants, the Norwegian government said it has halted donations to the international environmental organization.

GGGI’s Chairman Lars Lokke Rasmussen, former prime minister of Denmark, reportedly spent more than $180,000 on first-class flights and meals during 15 trips since May 2012.

A 16th trip to Switzerland in January this year was scrapped due to illness, but the pre-paid hotel and transportation expenses could not be canceled.

Norway’s Ministry of the Environment said Tuesday it will withhold donations of $10 million until it sees the results of another audit of the organization’s finances.

The GGGI, a think tank to study low-carbon growth that was a pet project of former President Lee Myung-bak, last week celebrated its one-year anniversary of being recognized as an international organization.

Rasmussen was elected as the chairman of GGGI’s board of directors in May 2012, succeeding Han Seung-soo, former Korean prime minister.

Rasmussen has been under intense scrutiny in Denmark after his travel expenses were revealed earlier this month by a Danish tabloid. He apologized last week for the spending and admitted to traveling “not too much but too expensively.”

GGGI received 90 million kroner ($16.6 million) in Danish foreign aid, and Denmark requested a review of the budget before its next budget allocation to the institute is made next year.

GGGI said it changed its travel policy so officials may no longer fly first class. The new rule has been implemented since August, according to a spokesman. It also said that Rasmussen did not have a GGGI corporate credit card.

Rasmussen said he flew first class nine times as part of GGGI-related travel after he became chairman in May 2012. He said he stopped flying first class in June.

GGGI responded to press reports with a 204-page memorandum on the details of Rasmussen’s travel expenses between June 2012 and September 2013.

GGGI was founded in June 2010 under the Lee Myung-bak administration’s green growth initiative to share experiences of environmentally-friendly development and has overseas offices in cities including Copenhagen, Abu Dhabi and London.