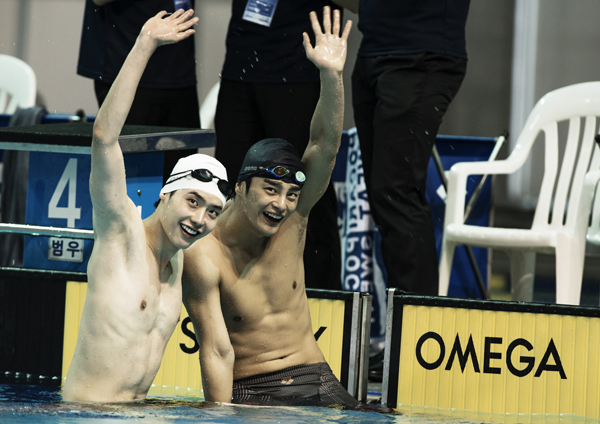 Although summer has come and gone, a film about swimming is set to heat up the screen with bare-chested “it boys” Seo In-guk and Lee Jong-suk playing leads in a film about swimmers at a physical education high school.

Female fans have no doubt noticed the life-size posters of the two at cinemas, on buses and the like. But there’s also something for male fans as Yuri of Girls’ Generation takes on the two heartthrobs in the teen flick “No Breathing.”

Lee plays Woo-sang, a talented swimmer who is uptight, aloof and hails from a privileged family.

Then there’s Won-il, a new student who is a headstrong, impulsive, live-for-the-moment kind of guy - everything that Woo-sang is not.

Drama unfolds as Won-il encroaches into Woo-sang’s territory. Yuri, meanwhile, is the token love interest that steals both their hearts.

Although the plot is predictable, it is unusual in that it is about the world of competitive swimming, and it is the first time that all three cast members are playing their biggest cinematic role to date.

Not only that, but “No Breathing” is also the debut work of director Cho Yong-sun.

At a press conference on Tuesday, the actors and Cho talked about the pressure they faced in seeing the project through.

As half the film takes place inside or next to a pool, Lee and Seo confessed that they were most worried about the state of their bodies.

“It was a burden at first. It’s the first movie about swimming, and the film had a lot of shirts-off scenes,” said Seo.

But Seo said he decided to take the plunge after reading the script, despite the risks.

While admitting that working on his physique was “just as hard” as acting, Seo said that controlling his diet and improving his acting range was draining, “both physically and psychologically.” 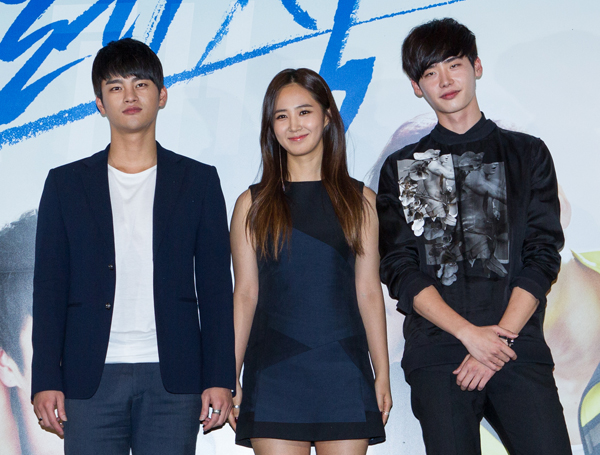 From left, Seo, Yuri from Girls’ Generation and Lee are taking on their biggest roles yet in the film, which is also the debut work of director Cho Yong-sun.

After having won “Super Star K,” Seo has dabbled in acting, his breakthrough piece being last year’s hit drama, “Respond 1997.”

Of course, Lee turned heads as the talented gay musician in the drama “Secret Garden.”

In a lot of ways, the two actors are very similar on paper. They have slowly but surely built up their fan base playing charismatic boys in various dramas, landing a few product endorsements and living relatively scandal-free lives so far.

And it seems a healthy dose of rivalry worked wonders for the two.

“In one of the first scenes we shot, I was shocked by my reflection and decided to work hard on my body. Because I couldn’t win height-wise, I knew I’d have to try in other ways, like standing up straight,” said Seo.

But as the grass is always greener on the other side, Lee, despite hailing from a modeling background, said he was equally disturbed by his own body.

Although not on a restrictive diet, director Cho also had a difficult job; bringing to life two (contrasting) alpha males that should somehow resemble Park.

Cho said that the two leads appealed to different demographics.

While he didn’t think it’d be appropriate to have the star swimmer make a cameo, Cho confessed that he was banking on the fame of his two leads and Yuri to help the film succeed.

“I have to admit that I’m hoping to tap into the aftereffects of ‘The Master’s Sun’ and ‘I Hear Your Voice,’ oh and Girls’ Generation,” he said.

Even if the cliche plot and formulaic characters fail to pull in viewers outside the teen market, Seo said that it was a learning curve for him.

“I really liked my character and from playing him I learnt a lot about the passion to follow through on your childhood dreams,” he said.