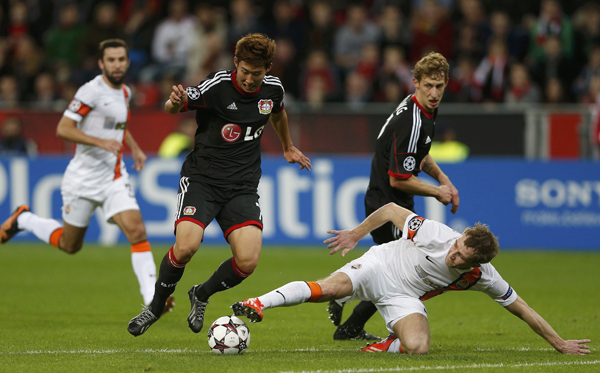 LEVERKUSEN, Germany - Stefan Kiessling scored twice as clinical Bayer Leverkusen defeated Shakhtar Donetsk 4-0 to leapfrog the Ukrainian side in Group A of the Champions League on Wednesday.

Kiessling scored with his side’s first real chance in the 22nd minute, when he rose above his marker to meet Giulio Donati’s deep cross.

The home side dominated possession but was unable to extend the lead with Kiessling missing another good chance in the 44th.

Then Alex Teixeira had a great chance to equalize before the break, when Douglas Costa played him through, only for the Brazilian to hit the side-netting with just the goalkeeper to beat.

Shakhtar coach Mircea Lucescu introduced the highly rated Brazilian playmaker Bernard for the second half, but his side suffered a setback when Kiessling was awarded a penalty after falling in a tussle with Darijo Srna.

Leverkusen captain Simon Rolfes duly scored from the spot in the 50th, and Son Heung-min sprung the offside trap for Sidney Sam to effectively seal the result seven minutes later.

Kiessling pounced after Shakhtar goalkeeper Andriy Pyatov spilled a cross from Emre Can to claim his second in the 72nd.

“Two goals and he earned a penalty. It was a top performance from him, especially when you consider all the discussion that went on before,” Rolfes said, referring to the furor over the Leverkusen striker’s “ghost goal” in the Bundesliga.

Last Friday, Kiessling was awarded a score against Hoffenheim despite heading wide because the ball ended up in the goal through a hole in the side-netting.

“I was very happy for Stefan,” said Leverkusen sporting director Rudi Voeller. “The last few days have been very difficult for him and he was confronted with a lot from all angles. But he is a tough guy and handled the situation well. He showed a lot of character today.”

Fans chanted Kiessling’s name against Donetsk and a banner was displayed to declare support for the beleaguered player.

Manchester United defeated Real Sociedad 1-0 at home in the other Group A game to maintain a one-point lead over second-placed Leverkusen.

“We’ve definitely taken a huge step in that we’re still in the race to get to the next rounds,” Voeller said.

Arjen Robben’s refusal to take a penalty for Bayern Munich in defiance of coach Pep Guardiola’s orders during Wednesday’s 5-0 Champion League win over Viktoria Plzen was the only blot on the game for the holders.

The winger refused to take the 25th-minute spot kick awarded for a foul on him despite Guardiola’s shouts of “Arjen, Arjen” from the sidelines.

On Saturday, Robben had been angered after being told not to take a penalty in the 4-1 Bundesliga win over Mainz 05 with Guardiola instead choosing Thomas Muller.

“I do not want to talk about it,” a visibly irritated Robben told reporters when asked about the incident. “Let’s not talk about it, let’s drop it.

“We had a very good game and 5-0 is a great result but we could have done better if we really want to be very critical.”

Guardiola confirmed Robben had been his choice for the spot kick but did not comment further.

“I did want Arjen to take the penalty,” he said.