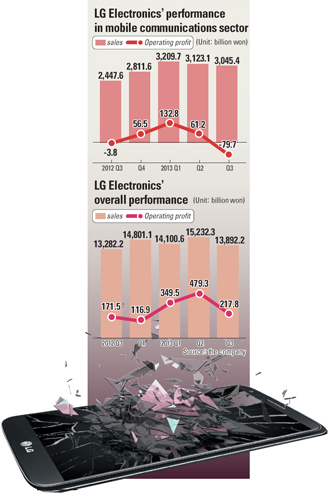 LG Electronics’ handset business went into the red for the first time in a year due to massive efforts to keep its No.3 position in the increasingly competitive mobile phone market.

Announcing performance for the third quarter ended in September, the tech company said it posted an operating loss of 79.7 billion won ($75.2 million) in the mobile communications sector, the first time it has been in the red since a 3.8 billion won operating loss in the third quarter of 2012. The mobile phone business accounts for almost all of the company’s mobile communications business. LG upgraded its tablet lineup for the first time in nearly two years with the release of the G Pad 8.3 this month.

LG, which became the world’s third-largest smartphone seller this year, has spent a large amount of money on marketing. It released its latest premium smartphone, the G2, in August.

According to LG marketing executives, the company has already spent more on marketing the G2 than it has for any other mobile phone it has sold. Eugene Investment & Securities estimated LG’s mobile unit spent 200 billion won for marketing in the July-September period.

The company said the deficit in mobile communications will be temporary.

“With sales of G2 gearing up, we will increase the sales of premium smartphones in the global market,” said a company official.

Overall, LG posted 13.9 trillion won in sales for the third quarter, up 4.6 percent from a year earlier. The overall operating profit was up 27 percent to 217.8 billion won, while net income was down 34 percent to 108.5 billion won.

The company said it sold 12 million smartphones in the third quarter, down from 12.1 million from a quarter earlier. Overall mobile phone sales, however, rose from 17.8 million to 18.3 million.

LG captured a 5.3 percent global share and maintained its position as the world’s No. 3 smartphone seller in the three months ended June 30, market researcher Strategy Analytics said in a July 26 report.

The company plans to beef up its premium smartphone lineup. It is also seeking a greater presence in the increasingly lucrative low- and mid-range smartphone market, with the L Series and F Series lineups.

Some analysts, however, are skeptical about the strategy.

“We knew LG would spend big on marketing for the G2. But the real thing we missed was that LG’s cheaper smartphones didn’t sell well either,” said Lee Seung-woo, a Seoul-based analyst at IBK Securities, before the earnings release. “High-end sales are slowing, but bigger players like Samsung is even eating into most of the share in the low-end space.”

The Home Entertainment Division, which makes TVs and last year accounted for about 47 percent of revenue, had an operating profit of 124.4 billion won in the third quarter. LG ranks No. 2 in market share for flat-panel TVs, researcher NPD DisplaySearch said Sept. 3.

“Even in the premium space, it seems hard to make big money from the ultra-high definition TVs with Chinese players cutting prices,” he said.

In the home appliance business, LG posted 2.97 trillion won in sales in the third quarter, up 3 percent up from a year earlier, but 7 percent below the previous quarter. Operating profit in the segment was 109.2 billion won compared to 122 last year, which the company attributed to the exchange rate changes.