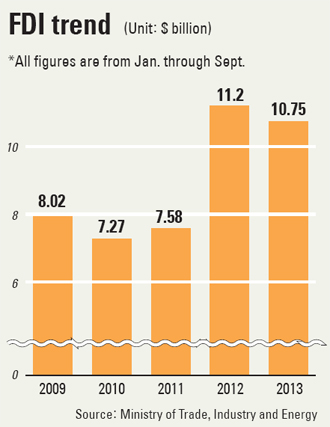 From January through September, the amount of foreign direct investment (FDI) reported to the government dropped 4 percent year-on-year.

According to the Ministry of Trade, Industry and Energy yesterday, $10.75 billion in FDI was reported during the past nine months this year, compared to $11.2 billion reported in the same period last year.

The ministry, however, defended the performance, saying the reported amount was 29.5 percent higher than the average figure of the past five years, and the arrived amount is 22.6 percent higher.

A major cause of shrinking FDI is a significant decline in investment reported from Japan to $1.96 billion, down 40.6 percent from the same period last year.

The ministry said Japan’s investment overseas is declining overall because of the weakening yen.

Total reported overseas investment dipped 5.9 percent in the first half of the year compared to the same period last year.

“Rather than quantity, quality investment is the first priority of the current government,” said Chun Yoon-jong, director of the FDI department at the ministry. “Since the country is receiving quality investment from investors in advanced countries, including high-level technologies, the current FDI trend isn’t bad at all. However, it seems unlikely to exceed last year’s record by the end of the year.”

The Ministry of Strategy and Finance has been focusing on promoting business investment, especially attracting foreign investors into the service industry, but a major bill to ease regulations on foreigners has been in the National Assembly for several months.

Next week, the Industry Ministry plans to hold the ninth Foreign Investment Week as a last-ditch effort this year to ramp up foreign investment.