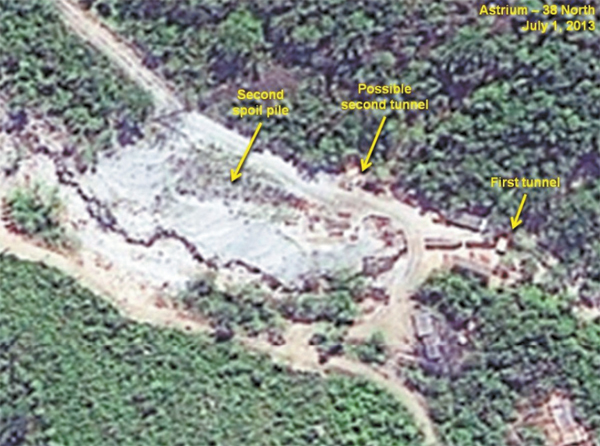 North Korea appears to have dug two new tunnel entrances at its Punggye-ri nuclear test site in North Hamgyong Province, according to a Washington-based research institute, leading to speculation that it may be preparing for more underground tests.

A report released by the U.S.-Korea Institute at Johns Hopkins University’s School of Advanced International Studies Wednesday revealed a new tunnel entrance at the site of nuclear detonations in May 2009 and last February, at the west side of the test site, and signs of continuing excavations. It was based on satellite imagery taken on Sept. 27.

The institute’s North Korea analysis division, 38 North, speculated that the digging of a tunnel at this site may have started in mid-May.

Another tunnel entrance was spotted near the main road in the southern area of the site, according to the satellite imagery. This could have been started as early as late 2011, said 38 North, adding that heavy rain in June could have delayed work at this site, and that infrastructure around the facility was damaged by the water.

The excavation may be to complete drilling “new tunnels that will be used for future nuclear tests” or expand existing tunnels for ventilation or facilitating traffic, said 38 North.

New imagery also shows construction activity, likely to be upgrades of support facilities and erection of a new building.

While there weren’t signs that Pyongyang is planning a fourth nuclear test in the immediate future, said 38 North, the construction activities “indicate that North Korea is planning to conduct future detonations as part of its overall nuclear weapons development program.”

Last month, 38 North revealed that a 5-megawatt reactor at the Yongbyon nuclear facility had been restarted.