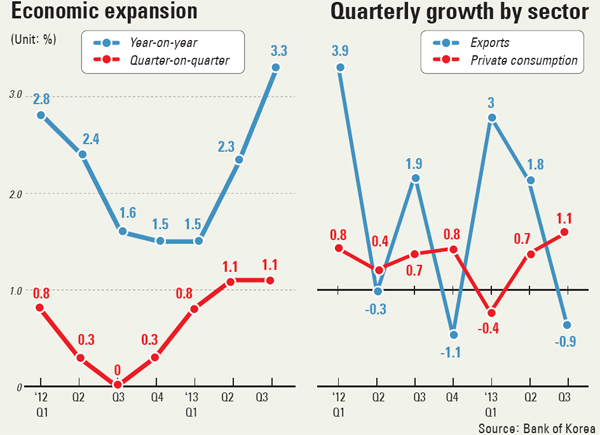 The Korean economy continued to show a strong recovery in the third quarter, largely due to an improvement in the domestic market. It is the first time in nearly two years that the economy has advanced more than 3 percent year-on-year.

At the current pace, the central bank is confident that the economy will meet its expectation of 2.8 percent GDP growth by the end of the year.

The Bank of Korea announced yesterday that the nation’s gross domestic product in the July through September period advanced 1.1 percent compared to the second quarter. It is identical to the quarter-on-quarter growth rate posted in the April to June period.

It is a clear indication that the Korean economy is once again regaining some momentum. The economy has been experiencing flat growth of less than 1 percent per quarter since the second quarter of 2011. It has been struggling to regain its momentum while battling deepening uncertainties in the global market as well as a sluggish domestic economy.

The performance in the third quarter is highlighted by its year-on-year expansion. The third quarter posted 3.3 percent growth compared to the same period a year ago. The last time it registered growth that strong was at 3.4 percent, recorded in the fourth quarter of 2011. Since then, growth rates have fallen to between 1 percent and 2 percent.

As was the case in the second quarter, the recovery from July through September was largely led by an increase in consumption in the private sector. In the third quarter, consumer spending rose 1.1 percent compared to the previous three months. This was a larger growth rate than that of the second quarter, which was 0.7 percent.

Increased investment by companies on facilities, including machinery and production plants, also helped boost the economy. Investment rose 1.2 percent year-on-year, which is a turnaround from a 0.2 percent decline in the previous quarter.

In contrast, exports declined, retreating 0.9 percent in the third quarter. This is a significant drop considering the 1.8 percent growth it registered in the second quarter.

Exports of machinery and petrochemical goods led the decline.

Although exports continue to rise month to month, the rate of increase has been slowing largely on the back of uncertainties in the global market.

The Bank of Korea earlier this month lowered its projection for next year’s economic growth, citing spreading uncertainties in the global market.

While advanced economies are on a recovery track, emerging markets - including Brazil - have been losing steam. The central bank projected next year’s growth at 3.8 percent, 0.2 percentage point lower than its projection in July.

“The growth [in the third quarter] was largely centered on domestic factors such as increased consumer spending and companies’ facility investments, while exports in the third quarter posted slower growth due to reduced work days due to the Chuseok holidays and stronger growth reported in the second quarter,” said a BOK official. “For the economy to regain full momentum, there should be stronger recovery in consumer consumption and larger investments by the companies.”