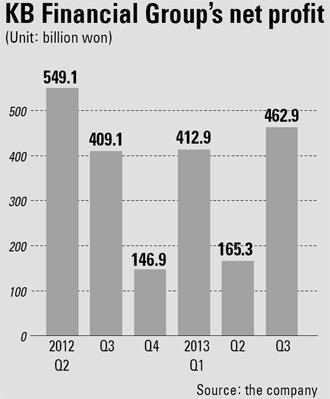 The country’s major financial groups are seeing an improvement in third-quarter earnings compared to the April-June period with a decline in their loan loss reserves. In the second quarter, earnings fell short of market expectations as they were strangled by mounting loan reserves, mainly because of debt-ridden STX Group.

“Full-year net profit should drop 20 percent year-on-year to 1.4 trillion won in 2013, but we expect a rebound to 1.6 trillion won in 2014,” said Han Jeong-tae, an analyst at Hana Daewoo Securities. “Earnings should normalize going forward.”

KB’s earnings announcement was made one week after Hana Financial Group in its regulatory filing said it posted 377.5 billion won in net profit in the third quarter. The figure is 62.8 percent higher than the previous quarter’s 231.8 billion won. From a year ago, net profit jumped 62.6 percent.

“The reason Hana Financial Group saw improvement is because its loan loss reserves declined by a significant amount,” said an industry official.

In the second quarter, its loan loss reserves were 294.9 billion won, including 150 billion won related to STX Group, but the reserves fell to 181.4 billion won in the third quarter.

While Shinhan Financial Group, Woori Financial Group and others are expected to announce their own earnings next week, a Kyobo Securities report forecast last month that the combined net profit of the country’s four major financial groups will increase 40.9 percent from the second quarter to 1.6 trillion won. Shinhan will announce its third quarter earnings Tuesday and Woori on Friday.