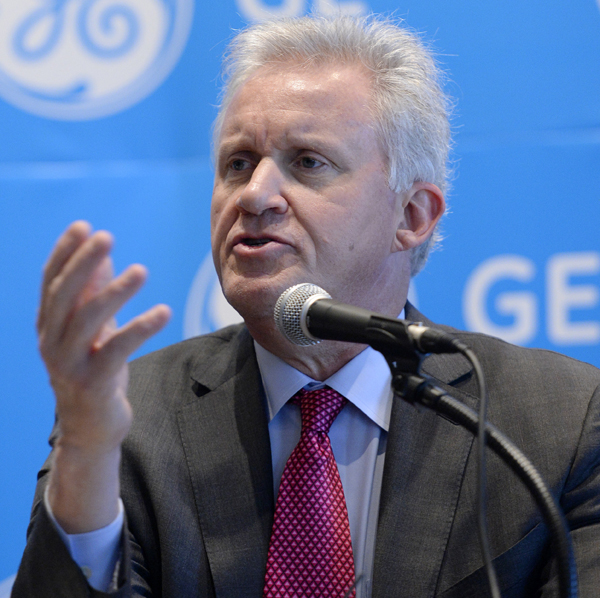 General Electric chairman and CEO Jeffrey R. Immelt said yesterday that he’s hoping for a larger partnership with Samsung, which is becoming a growing threat in its cash cow areas, such as the medical device business.

The fast emergence of a rival piqued fresh interest for Immelt, who visited Samsung’s headquarters in southern Seoul on Thursday and talked with Samsung executives.

“I think in the world today, with the big companies like Samsung and GE, you are a kind of a supplier in the morning, a partner at noon and a competitor in the evening, and that’s what our relationship with Samsung is in health care,” Immelt, who was head of GE’s medical services division, the predecessor of GE Healthcare, before he became GE chairman in 2000, said at the Hotel Shilla in Seoul. “It’s the nature of the global economy.”

“We have many business interface operations with Samsung and will continue to see that expand in the future,” he said. “We view Samsung as a natural collaborator and a partner.”

Both companies are flagship conglomerates representing the United States and Korea, each adding to their growing lists of blue-chip businesses. GE, founded in 1878 by Thomas Edison, has a large presence beyond its traditional turf of consumer electronics, such as aviation, energy infrastructure, finance and health care.

Immelt said that people might have legitimate concerns about the conglomerates both in the United States and Korea, but he said that a company can be good at multiple areas while creating better efficiency and value. He said new corporate success stories like Google and Amazon.com are also expanding to become “their own form of conglomerate.”

He declined to comment in detail on Samsung’s eventual transition in leadership from its current chairman, Lee Kun-hee, to his son, Jay Y. Lee, but he was optimistic that it will be successful, citing Samsung’s unique DNA for success. GE also shares one of the traits for longevity, a respect among the employees for the company, he said.

Immelt, who also met with President Park Geun-hye on Thursday, said the Korean government’s creative economy initiative will increasingly put Korea in value-added areas. He said the initiative gives GE a sense of where to invest further in Korea.

“For instance, the Korean economy has the best information technologies infrastructure of any country that we compete with in the world,” he said, citing the industrial Internet as an example. He added that the vast presence of Korean companies worldwide will help many foreign partners to expand. GE also opened its global headquarters for offshore and marine business on Wednesday in Busan.