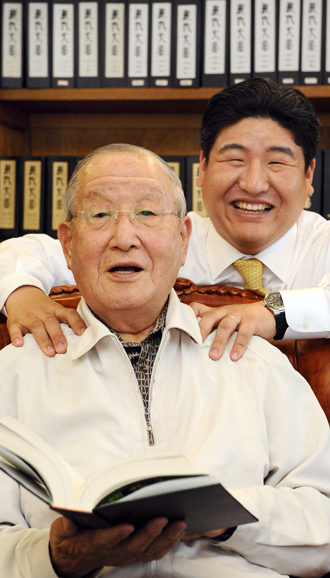 The late Kim Kwang-su (left) and his eldest grandson, Kim Young-jin, the current CEO of MiraeN, in a family photograph. Provided by Korea Economic Daily

Kim Young-jin had tears in his eyes when he accepted the Eun-gwan Order of Cultural Merit award in place of his late grandfather, Kim Kwang-su, the honorary president of MiraeN, on the 27th annual Book Day. His grandfather’s sympathetic image came to his mind, and he couldn’t help but to recall his legacy.

“Even in his last moments,” his grandson said, “he would intensively read newspapers and hold the books .?.?. That serious look on his face is still a vivid memory.”

Kim Kwang-su grew up in small village in Muju, North Jeolla, and was the youngest of five brothers. In his memoir, he described his hometown as a place “where endless, winding valleys and cottages were gathered.”

He dropped his studies after elementary school, deciding to educate himself, and eventually took what little money he had and moved to Seoul.

Once there, he met a man by the name of Kim Ki-o, who took the young boy into his care.

Kim Kwang-su joined the company in 1948 as a founding employee and took over after Kim Ki-o’s death. Kim was a competent businessman, setting the foundations for what it is today: An education publishing business that prints more than 1,500 kinds of books per year.

At that point, the Government Designated Textbook Corporation exclusively provided textbooks to elementary schools, with Daehan Textbook providing those for middle and high schools.

At first, Kim Kwang-su struggled to win contracts at home and in Japan, so he established Eomoongak, in which he acquired the Government Designated Textbook Corporation and expanded the business to include the production of general books. Today, the company has published 28,000 kinds of textbooks, with a total of 1.86 billion copies sold.

Eomoongak caused a sensation in the publishing industry after the release of the “New English-Korean Dictionary,” the result of a new typesetting machine and paper mold technology. From then on, dictionaries took off in Korea.

“Look what we can do when we try,” became the motto of the company until the end of 1990s.

“Contemporary Literature,” was also a result of Kim’s hard work and efforts to improve the publishing industry. The literary magazine hit the stands in 1955 and churned out promising writers under the slogan, “The destiny of humanity depends on the power of culture.”

Now, with the support of MiraeN affiliates, the magazine is published every month and has never missed an issue.

Perhaps the most interesting aspect about Kim was his connection to the late Yuk Young-soo, mother of President Park Geun-hye.

“Yuk Young-soo often visited Daehan Textbook to find books to donate to Saemaeul villages and schools,” Kim wrote in his memoir. “She would [arrive in an] average sedan to talk about books with our employees, and then [leave quietly]. Though she was a first lady, she never stopped by the CEO’s office.”

In fact, an old photograph of Kim and Yuk Young-soo still hangs in the MiraeN office.

Yuk Young-soo’s scholarship foundation published a children’s magazine in 1967, which directly competed with Kim’s “Saesoneon (New Boys),” a magazine for children that featured cartoons. Around 20,000 to 30,000 copies were published each month.

It was the first cultural magazine in Korea since “Soneon (A Boy)”, which ceased publication during the 1950-53 Korean War.

As well as publishing, Kim also got involved in politics later in his career. Kim was elected as a nonpartisan politician in 1973, with support from young voters in Muju, Jinan and Jangsu regions. For five terms, he served as the vice president of two different parties.

But above all, he is probably most remembered for his social contributions.

In 1973, he started the Mokjung Scholarship Foundation, which has provided scholarships to 3,600 students. Throughout his career, Kim held the firm conviction that “the benefit of the business must be returned to the society.”

Kim Young-jin joined MiraeN in 2002 at the request of his grandfather after graduating from Boston College.

“Since I was young, my grandfather would apologize for ‘not giving anything to my grandson,’?” Kim Young-jin recalled. “But he has given me everything. Most of all, I manage the business with the virtue of modesty, integrity and devotion.”

Recently, the younger Kim has been working on expanding his grandfather’s business to include publications for preschoolers and adults. He has also invested in various content developments by advancing the business into digital textbook publishing, a first in the industry.

“I plan to initiate a book industry targeting the elderly [because] I was sad to see my grandfather had no appropriate books to read on his sickbed. The market size [can also expand this way]. But ultimately, I hope I can please someone like my grandfather.”