Koreans take No. 2 for working hours

Koreans take No. 2 for working hours 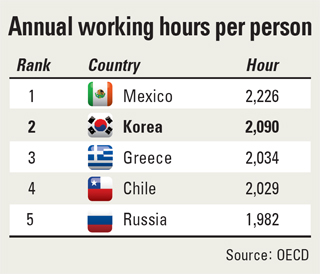 Korea may be a highly advanced country in manufacturing, but in the labor and social sectors, it still resembles a developing nation, a government report said yesterday.

The Korea International Trade Association (KITA) announced the fourth-largest Asian economy ranked second among 150 countries in terms of per capita working hours in 2012, according to statistics complied by the Organization for Economic Cooperation and Development. Mexicans were the only people to work more.

But the growth rate for labor compensation per hour was 9.8 percent in Korea in 2011, the highest among all countries, the data noted. Growth in wages in the United States was only 2.2 percent.

The OECD compared 150 countries, including countries that are not members of the organization.

The report also showed the average participation rate of female workers in the country’s economy was 49.9 percent last year, taking 25th place on the list. The United States was 11th with 57.7 percent.

Korea’s worst performance in the data was in total fertility rate. It came in 146th.

“When you are comparing those rankings with the nation’s good brand image described by the International Institute for Management Development, it shows Korea still has a long way to go to improve its labor and social sectors,” said Shim Hye-jeong, a research fellow at KITA.

In a recent report on the image of countries by the IMD, Korea ranked eighth this year, up two notches from last year.

When it came to the quality of life, Korea came in 34th.

Meanwhile, the report reaffirmed the country was No. 1 in terms of mobile phone shipments and No. 2 in semiconductor sales after the United States.

Samsung snatched second place in terms of revenue from manufacturing of semiconductors at $30.5 billion after U.S.-based Intel with $47.5 billion.

The country was the second-biggest shipbuilder by order volume and the fifth-largest automaker.

In terms of trade, Korea was the eighth-biggest trading country in 2012, rising one notch from 2011. It was the seventh-largest exporter.