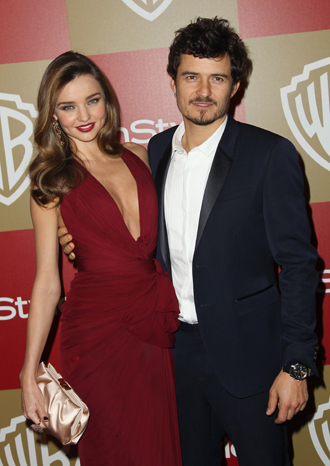 Miranda Kerr and Orlando Bloom at a Golden Globe party in Beverly Hills, California, on Jan. 13, 2013. Bloom and Kerr confirmed the end of their marriage on Friday. [AP/NEWSIS]

NEW YORK - The marriage of actor Orlando Bloom and model Miranda Kerr has ended - even as Bloom tackles one of the most romantic roles in history, Romeo.

Publicist Robin Baum released a joint statement Friday that said Kerr and Bloom - two of the most beautiful people on the planet - “have been amicably separated for the past few months” and “recently decided to formalize their separation” after six years together.

The 36-year-old actor, who starred in “The Lord of the Rings” and the first three “Pirates of the Caribbean” films, and the 30-year-old supermodel were married in 2010. They have a 2-year-old son, Flynn.

Bloom is making his Broadway debut as Romeo in director David Leveaux’s revival of Shakespeare’s “Romeo and Juliet” opposite Condola Rashad, who has back-to-back Tony Award nominations for “Stick Fly” and “The Trip to Bountiful.”

Reviews have been mostly negative and the show has struggled at the box office.

In an interview in September, Bloom said he was excited to be making his American stage debut and taking his career on a new course. He said he was planning to join the Royal Shakespeare Company after college, but director Peter Jackson whisked him to New Zealand for “The Lord of the Rings” and then he was off on a movie career - “Black Hawk Down,” the “Pirates of the Caribbean” franchise, “Elizabethtown” and “Kingdom of Heaven.”

“I feel like this is what I was supposed to be doing or at least part of what I was supposed to be doing. I found myself doing movies - which were wonderful and amazing and I love - I’ve got a collection of movies at home that my son is going to absolutely drool over when he’s the right age,” he said. “But for Orlando and for the actor in me, this process is so rewarding and I just feel like I’m going to be a different actor after this. I already feel like a different actor.”