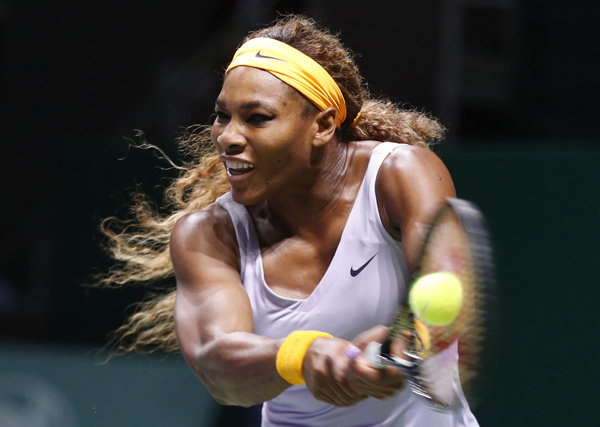 Serena Williams hits a return to Jelena Jankovic during their WTA Championships semi-final match in Istanbul on Saturday. [REUTERS/NEWS1]

ISTANBUL - Even when she hits a wall, Serena Williams can’t be stopped.

An exhausted Williams managed to hang on to beat Jelena Jankovic 6-4, 2-6, 6-4 on Saturday and will play Li Na in the final of the WTA Championships.

Li Na advanced to her first WTA Championships final by sweeping past 2011 winner Petra Kvitova 6-4, 6-2, setting up a showdown between the two oldest players in the tournament.

Williams was in obvious discomfort throughout the match, moving poorly on court, walking slowly and holding her face in a towel during changeovers.

“I was so tired just even standing. I think I played a lot of tennis this year, so I don’t know. After a while I just felt like a big rush of air just come out of me, and I really had to pull myself through that match. I don’t know how I did it.”

Jankovic, who said she was battling a cold herself, was unable to take advantage of Williams’ weakness and the American is one win from her fourth WTA Championship and 11th title of the year. Williams has won 77 of 81 matches this year.

“For some reason, every time she starts losing, she starts serving slower or not running for certain balls. That’s something that, you know, as a player you have to pay attention to. It’s not the first time when we played that she’s doing this,” Jankovic said.

Jankovic also pointed out that Williams had won all of her previous matches in straight sets - and Jankovic had spent a total of five hours, 41 minutes on court, more than two hours more than Williams. Williams also had Friday off, while Jankovic played.

Williams wasted a match point and failed to serve out the match at 5-2 and Jankovic won two straight games. Williams squandered two more match points before finally closing it out with a smash.

Like Williams, Li is unbeaten in four matches, after failing to advance from the group stage in the previous two years. But she is 1-9 against Williams in previous matches.

Williams, 32, and Li, 31, are the two oldest players in the elite, eight-woman tournament, while the fifth-seeded Kvitova is the youngest at 23.

Making her eighth appearance in the event, Williams is looking to become the first player to successfully defend the title since Justine Henin in 2007.

And she is the first woman player to make $10 million in a single season; as a runner-up, she will have collected $11.3 million, as champion, $12.3 million.