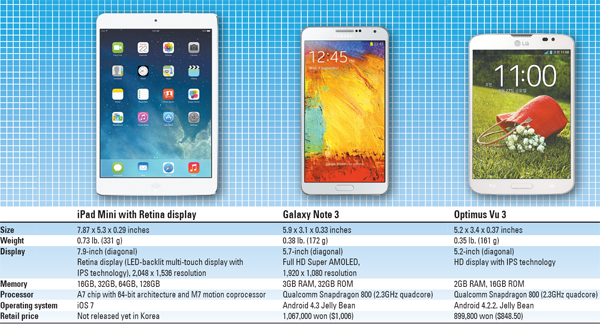 College student Ye Yun-gyeong is a computer science major. But, arguably, she learns more from using her phablet every day than from textbooks or lab work.

Ye says she can’t imagine life without her Samsung Galaxy Note 1. She uses it to read academic journals and, because of the notepad functions, she can highlight sections and write comments in advance of class discussions. After classes, she watches the videos of lectures or debates, which she shares with other classmates along with sandwiches.

“I used to carry a laptop to lectures or a tablet PC, but they were way too heavy,” Ye says. “This phablet is the only device I carry all the time because I can do pretty much everything on it except writing papers.”

And aside from schoolwork, Ye says she spends her spare time playing mobile games, as 51 percent of Korean smartphone users do, according to an August study by Flurry Analytics, a U.S.-based mobile market research company. Gazing at the 5.3-inch screen for long periods hurts Ye’s eyes and shoulders, and she’s also feeling strain on her wrists and back of her neck. But she doesn’t care because she relies on the device so much.

Phablets are big business in Korea, more popular among consumers - women in particular - than in other countries. According to Flurry’s study, 41 percent of all mobile phone users in Korea are using phablets with screens sized between 5 inches to 6.9 inches diagonally, whereas only 7 percent of mobile phone users worldwide use them.

Phablet is a compound word for phone and tablet that first appeared last year and entered the Oxford Dictionary in August. The Wall Street Journal defined the device as “hybrids of smartphones and small tablets with a screen size of five to seven inches” in a report earlier this year. Samsung Electronics’ Galaxy Note 1, first unveiled at the IFA 2011 and put on sale in December 2011, was the first successful phablet in the mobile market.

It sold more than 5 million units in its first five months, helping the company capture two thirds of the local mobile phone market share, according to Samsung in March 2012. The diagonal size of the screen was 5.3 inches. Next generation models, the Galaxy Note 2 and 3, were slightly larger at 5.6 and 5.7 inches. 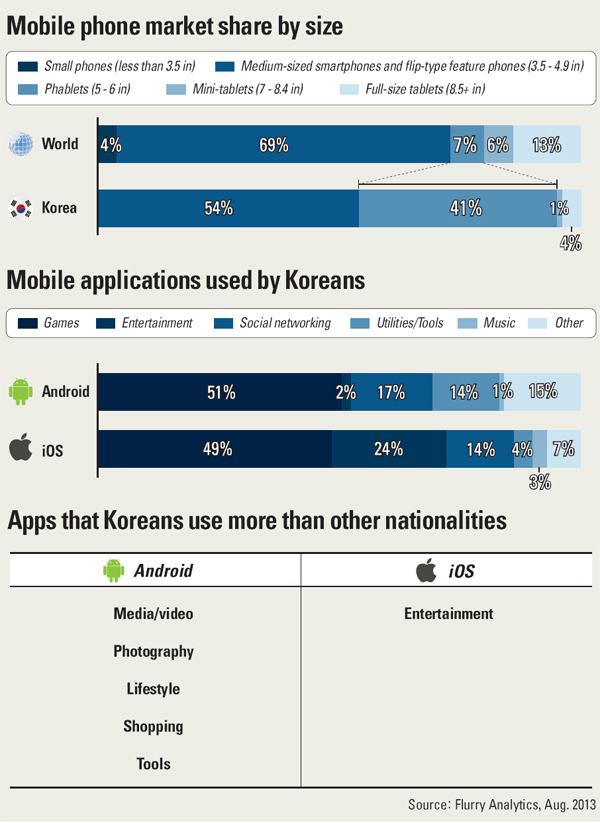 “Many women purchase the Galaxy Note 2 and 3,” says a mobile phone retailer near a women’s university in northwestern Seoul. “It’s true that the phones are big and easy to drop. But people still buy them.”

“Female customers usually go for the Galaxy Note 3 or Galaxy S4,” says another retailer nearby. “Customers who are particular about functions choose the Note, and the rest purchase the S4, which is relatively smaller and convenient.”

Almost 100 customers signed up for the new iPhone 5S and 5C on the first day of pre-bookings on Oct. 19, according to one mobile phone retailer. Most of them were veteran iPhone users who keep purchasing newer generation models and aren’t concerned much with the competition or with the devices’ sizes.

According to the Flurry study, which was partly based on data provided by SK Planet’s T Store, the nation’s largest mobile application market, Korean smartphone users in both the Android and iOS systems spend more than 50 percent of their time on the phones playing with applications related to games or entertainment such as watching videos and taking photos. Koreans used applications related to video, photography, lifestyle, shopping and entertainment more than users in other countries, the study said.

In 2011 and 2012, the Korean smartphone market grew faster than the worldwide market, partly because Samsung Electronics introduced the Galaxy Note 1 and 2, according to Flurry.

“Before the era of smartphones, Korea was the only country where portable media players (PMP) and digital multimedia broadcasting (DMB) flourished thanks to a digital culture that began a decade ago,” says Lee Jang-gyoon, a chief researcher at Hyundai Research Institute. Since the early 2000s, students of all ages have been downloading video lectures, movies and audio lectures, and looking up electronic dictionaries, while adults watched live-streamed dramas on devices via the DMB service.

Lee explains that those players were typically sized around 3 inches on average, and the size reached as large as 4.8 inches by 2009 when companies began wrapping up the PMP business due to the introduction of smartphones, which took over.

“The unique experience of constantly watching videos with PMP players, in part, formed Korea’s culture of enjoying entertainment on mobile devices,” he says. “As those functions migrated to smartphones, it is almost obvious for Korean smartphone users utilize them as a mean of entertainment rather than merely communication. It’s natural for them to choose larger screen for better visibility.”

A public relations representative from Samsung Electronics’ mobile phone division says the nation’s largest smartphone manufacturer keeps introducing products in various sizes because it is difficult to predict the maximum size consumers can handle.
“The trend is definitely larger screens over smaller ones, which led us produce upgraded models larger than the previous generation. The Galaxy S4 and Note 2 are larger than previous models,” the representative says.
“The late Steve Jobs said there is no need for huge smartphones,” says Lee the Hyundai Research Institute, “but even Apple is producing larger iPhones.”

Miss Kim, another college student, is loyal to her LG Electronics’ Optimus Vu 2, which the nation’s second-largest smartphone manufacturer markets by emphasizing its four-to-three screen ratio, which is the same ratio used in televisions. Kim lives in a tiny studio apartment without a television, so she watches live-streamed television programs or video lectures on her phablet. However, she complains about its large size, saying it’s a bit too big for her small, chubby hands.

According to a study by Size Korea released Sept. 9, Koreans have relatively small hands, with the average length between the tip of the thumb and wrist reaching 110 to 120 millimeters (4.33-4.72 inches). Women in their 20s had the shortest average of 110.32 millimeters. “My hands really hurt due to the more evenly-proportioned screen,” Kim says. “My fingers are short. I can’t hold it too long on the bus or subway, when I only have one empty hand.” She even dropped the phablet and shattered the screen, but can’t afford to have it fixed.

But she’s not giving up her phablet.

“I enjoy mobile television application on my Vu,” she says, “thanks to the screen’s size and proportions.”