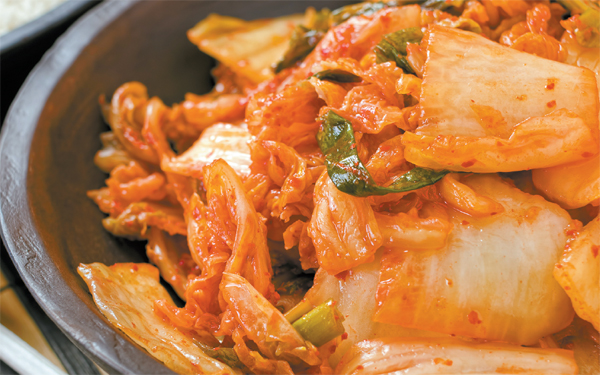 “Last week, we picked napa cabbage in the garden. Now we’re using it to make kimchi in the kitchen. Make it at home,” Michelle Obama tweeted in February, along with a photo of the Korean staple. The first lady also introduced a kimchi recipe.

It was perhaps the best example of how kimchi is becoming more common in western society.

According to the Korea Agro-Fisheries and Food Trade Corporation, Korea exported a record $106.608 million worth, or 28,000 tons, of kimchi to 62 countries last year - a record high. Of these exports, 80 percent went to Japan, followed by the United States, Hong Kong and Taiwan.

However, Korea’s kimchi bragging rights end there. The kimchi industry in the 21st century is suffering from tough competition with China, imbalance in supply and demand, and decreasing consumption.

Although Korea is the home of kimchi, it has been a kimchi importer for some time. Imports have surpassed exports, since 2004 in terms of weight and since 2006 by value.

Last year, Korea’s kimchi trade deficit was $4.2 million. This year, the deficit was $7.6 million through August, and the number gets bigger if imported pickled cabbage and napa cabbage are included.

By far the biggest source of kimchi imports is China. Last year, more than 90 percent of imports came from there.

“From January through August, domestic kimchi exports decreased 14.2 percent compared to the same period last year and the imports increased 12.4 percent,” said lawmaker Lee Woon-ryong of the ruling Saenuri Party. “Korea has been reduced to being a net importer of kimchi.”

Exports to China stopped because China did not create a separate sanitary standard for Korean kimchi and applied the strict criteria used for its Pao Chai, or pickled vegetables, of less than 30 coliform bacteria per 100 grams.

Pao Chai is a sterile food product that is used to ferment various vegetables after boiling them with salt, pepper leaves, red pepper and water. Coliform bacteria is completely killed.

However, kimchi is different. As it undergoes natural fermentation without heat treatment, various bacteria such as lactic acid bacteria survive.

The only kimchi exports to China were heated kimchi, such as stirred kimchi.

Although China has applied the Pao Chai standard to kimchi imports since 2004, the Korean government began to ask the Chinese government to revise the hygiene standards in 2009.

No progress has been made as the Chinese government did not cooperate, and the Korean Ministry of Agriculture, Forestry and Livestock has dropped the matter.

There was only one official responsible for the kimchi industry in the ministry and that person was recently transferred to another department. The position has been vacant for nearly a month.

It is also a problem that Korea’s kimchi is known among consumers in China only as Korean Pao Chai.

Kimchi being recognized as a subtype of China’s Pao Chai rather than a distinctly Korean food also added to the difficulties of maintaining exports and raising awareness of kimchi.

Still, it does not mean that there is no demand for kimchi among Chinese consumers.

According to the kimchi sales breakdown at the Incheon International Airport duty-free shop, Chinese tourists accounted for 41.4 percent of the shop’s total of 9.7 billion won ($91.3 million) in kimchi sales during the past five years.

As of August, Chinese consumers were responsible for 50 percent of all kimchi sales.

“It is necessary to seek a new way out for kimchi exports targeting high-income Chinese people and the Korean residents in China,” said Lee. “Strong diplomatic responses by the Korean government against the Chinese government based reciprocity are also required.”

In contrast to the demise of Korean kimchi exports to China, Chinese kimchi is all the rage in the Korean market.

Except for the finest restaurants in Korea, most restaurants are serving Chinese kimchi because it is a fraction of the price of Korean kimchi.

Although local newspapers and television programs often report on kimchi manufacturing sites in China with poor hygiene conditions, it seems to have no effect on sales of Chinese kimchi.

To make matters worse, kimchi exports to Japan have been sluggish.

The decline can be blamed on the depreciation of the yen, soured relations between Korea and Japan, and parasites found in Korean kimchi in 2005.

“Korean kimchi is suffering from hygiene issues in Japan and export blockage in China due to foreign trade problems,” said Park Jong-cheol, kimchi research director at Sunchon University. “We should diversify the kimchi export market focused on Japan to North America and Southeast Asia and open the door to Chinese market, which could be the world’s largest kimchi [market].”