The stone pagodas and lantern of Borimsa Temple

The stone pagodas and lantern of Borimsa Temple 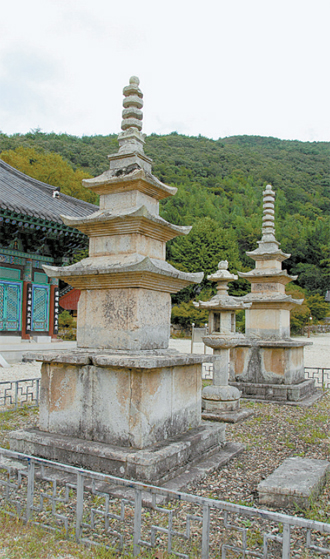 Two stone pagodas and a stone lantern stand in front of Borimsa Temple, at the southern foot of Mount Gaji in South Jeolla.

A monk named Chejing selected the site of the temple and founded it in 860 A.D. at the request of Silla Dynasty’s King Heonan. The temple flourished, and more than 20 structures were built there, although most were destroyed by fires during the 1950-53 Korean War.

The two pagodas have the typical shape of the Silla era, with a three-tiered body on a two-story platform and ornamentation on top.

The upper story of the platform is large compared to the lower one. The uppermost stone of the upper-story platform is very thin. The core and roof stone of the pagoda body are made of a single stone.

The stone lantern has the octagonal shape typical in the Silla era. It is notable for the decorations, which are still intact on its top - a very rare occurrence.