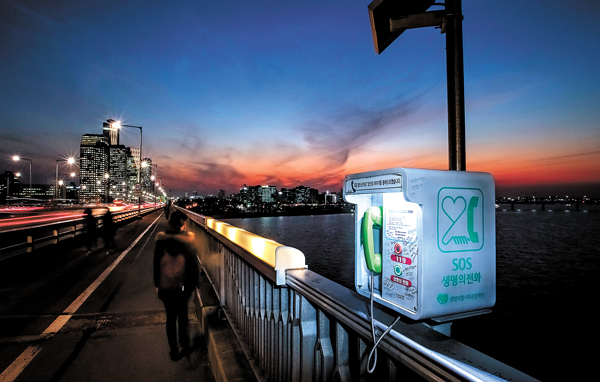 A special hotline on Mapo Bridge in western Seoul. If a suicidal person punches the green button, a call goes through to Lifeline Korea. By Park Jong-keun

Choi Jang-sook, 67, gives advice over the phone for a living. But her 24-hour hotline doesn’t give people real-time traffic conditions or locations of restaurants.

Choi’s job is to explain to people at the other end of the line why life is worth living. Her phone rings at 8:16 p.m. and Choi answers. There’s a teenage voice at the other end, a student, who is crying. The student says he’s on Mapo Bridge intending to commit suicide. Friends recommended it as a good place to end one’s life.

The counselor takes a breath and asks, “How do you feel?” The 16-year-old answers, “The view is beautiful, and it’s perfect weather to take my life.”

Choi asks what led him to think of suicide. He begins unburdening himself. “My father often beats me if my scores on tests fall short of his expectations,” he says. “My grandfather was very strict and it seems that he believes he has to be the same kind of parent,” the teen says. 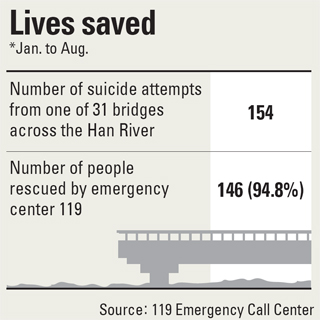 The conversation has consoled the teen, and he agrees not to jump off the bridge. He listens to Choi’s advice before he hangs up the phone.

The calls come from 20 emergency telephones installed on five bridges along the Han River, which are known as some of the most common destinations for distraught people intent on suicide.

The phones have two buttons. One connects potential suicides to a counselor like Choi. The other button connects to the 119 emergency center. It’s most often used by people who have witnessed a suicide and who call for a rescue team.

Back at Choi’s office, another call comes through after 30 minutes. It’s a woman this time. She introduces herself as a college graduate who majored in industrial design.

“I graduated from university all the way back February, but up until now I couldn’t find a job,” she cries. “I feel as though I have taken a wrong road.”

Choi advises her to write down things in her life that make her feel grateful, and tries to convince her that life is worth living.

According to Lifeline Korea, 548 people called last year to talk about problems and 163 wanted to discuss suicide. The biggest causes of despair were unsuccessful job searches (40 cases), followed by romantic problems (22). Also on the list were financial problems and loneliness.

To dissuade suicide attempts, the Seoul city government painted motivational messages last September on the guardrails of Mapo Bridge, nicknamed Suicide Bridge because it attracts the largest number of suicidal people. The guardrails also have pictures of things that may break through people’s despair, like babies, ice cream and char-grilled steaks. Mapo Bridge also has hotlines connected to Lifeline Korea.

“Koreans don’t feel comfortable talking about their worries because they feel like a failure in doing so,” Yook said. “But the hotline doesn’t ask callers to identify themselves, so that anonymity puts them at ease and lets them explore their feelings.”