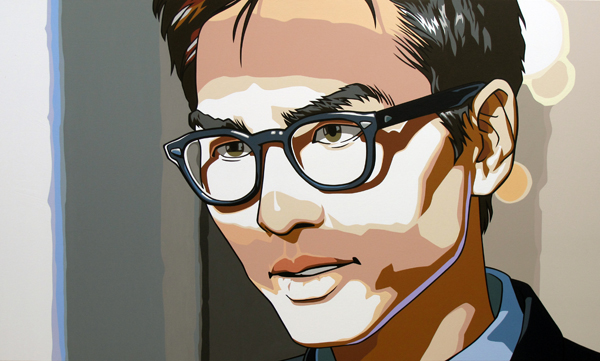 “The Guy with the Glasses,” above, and “Family Photo,” below, are part of pop artist Lee Dongi’s “Soap Opera” series, which capture the cliche scenes of Korean TV dramas. They are on display at Songwon Art Center as part of his solo show titled “Don’t Look Back in Anger.” Provided by the gallery

A handsome man from a chaebol family falling in love with a good-natured, cheerful girl from a poor family is a notorious cliche of Korean TV dramas, which led the so-called Korean Wave before the rise of K-pop. But cliches are not only in characters and plots. They can be found in some gestures of actors, scene settings and the angles of the cameras that film them.

Those who are unconsciously used to these images would feel familiar and, at the same time, unfamiliar, when they see the latest paintings by Lee Dongi, who is often dubbed “Korea’s leading pop artist.”

“I was inspired from the numerous TV show screen captures uploaded by foreign fans on Korean Wave Web sites and blogs,” Lee told the Korea JoongAng Daily at the gallery last week. “I could find some repeated images unique to Korea or Asia. For example, Korean dramas, regardless of their genres, have much more scenes that show family members gathered than American dramas.”

“I’d like to show stereotypes of Korean TV dramas, with which we have been too familiar to be aware of,” Lee continued. “They can be viewed fresh from a global perspective.” 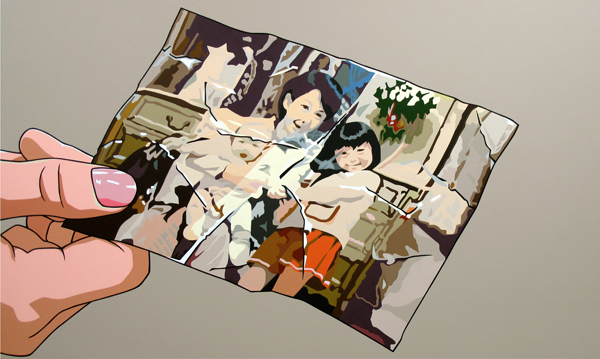 In addition, the cliche images can be seen as new even to Korean viewers in the context of an art gallery.

“Family Photo,” another painting among Lee’s “Soap Opera” series, depicts a close-up of a faded and crumbled photograph of a family in someone’s hand. Viewers will also see this as a typical scene in Korean TV dramas, especially accompanying the secrets of a main character’s birth, which is a representative cliche of local soap operas.

Then, the painting could lead viewers to question why Korean dramas prefer to include the secrets of a main character’s birth. That might reflect the audience’s desire to have their lives turned around dramatically in Korean society, where it is getting more and more difficult to make one’s own fortune without a good family background, as culture critics say.

Like this, Lee is capturing the Korean society’s cross sections with his “Soap Opera” series, which he started last year.

Before, he focused on paintings depicting the character Atomaus, which he created by combining Atom (Astro Boy), the boy robot hero of Japanese anime, and Mickey Mouse of U.S.-based Walt Disney.

With this character, he satirized Korean pop culture that was heavily influenced by Japan and the United States.


The exhibition runs through Thursday. Admission is free.