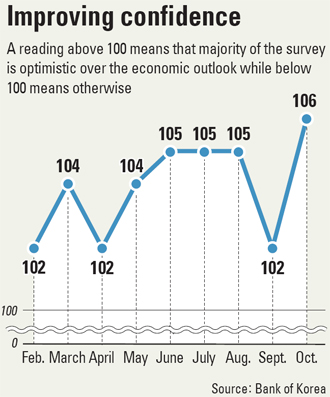 Korea’s key measure of consumer confidence in October rose to its highest level since mid-2012 as Koreans feel increasingly optimistic about their living conditions, a survey by the central bank showed yesterday.

The composite consumer index (CCSI) inched up to 106 in October, compared to 102 in the previous month, the Bank of Korea said.

It was the highest index reading since May 2012.

A reading above 100 indicates consumers feel more positive in the coming month than the long-term average sentiment accrued from 2003 to 2012.

The central bank’s index has so far stayed above the neutral line this year and was last below 100 in December 2012.

The data comes just after the Bank of Korea released its estimates for third-quarter gross domestic product growth in Asia’s fourth-largest economy, which grew a seasonally adjusted 1.1 percent in the July-September period.

The growth estimates were slightly above market consensus and mainly supported by growth in domestic demand.

Meanwhile, the same data on Monday showed October’s median expected inflation rate for the next 12 months at 2.9 percent, steady from September’s rate.

The Bank of Korea said it polled more than 2,000 households across the nation from Oct. 10 to 18. Reuters