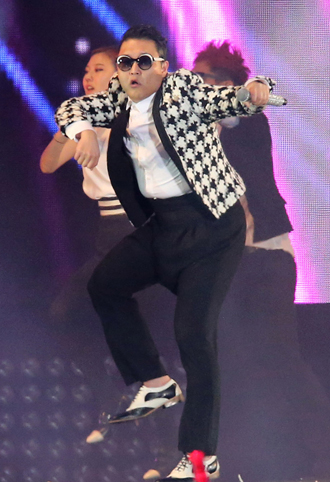 Psy is teasing his fans over his coming concerts at the end of December.

“What is dancing under the moonlight?” he asked on his Twitter account yesterday, signaling that he is ready to dance for his fans. He also released a photo of a poster explaining what he wants from the concert.

“It means to satirize [someone] doing things that is inappropriate for their status, and how hard have you tried to keep that ‘proper’ attitude?”

Psy also said that, despite releasing a song that’s racked up 570 million views on YouTube, he has had hard time this year.

“It has been about a year since I was forced to go overseas, and I’ve tried so hard to become strong, only to have more stress and better English,” he joked, adding that it was hard for him to perform just two songs wherever he goes - “Gangnam Style” and “Gentleman,” of course - when he used to perform around 15 songs at a concert.

“All of us who’ve tried so hard to make this year, let’s forget about ‘status.’ Or, better yet, let’s do things that fit all our ‘statuses’ at once!”

Psy will hold concerts from Dec. 20 to 22 at Seoul Olympic Park in Songpa, southern Seoul, and again on Christmas Eve at the same venue.