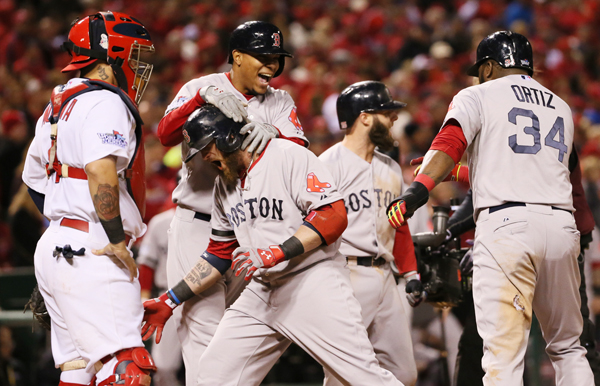 Xander Bogaerts of the Boston Red Sox, top, congratulates teammate Jonny Gomes after Gomes hit a three-run home run in the sixth inning during Game 4 of the World Series against the St. Louis Cardinals on Sunday in St. Louis. [AP/NEWSIS]

David Ortiz added three hits and also encouraged the Red Sox, shouting at his teammates from second base after a double and later gathering them for a huddle in the dugout.

With the Red Sox in danger of falling into a 3-1 deficit, it was a stroke of good fortune by Gomes - he was a late addition to the lineup when Shane Victorino’s back stiffened up, and was 0 for 9 in the Series before connecting off reliever Seth Maness.

Gomes spread his arms wide as he rounded first base and banged his chest.

Along with his pop, Gomes showed off the patience that marks Boston hitters. He drew a 10-pitch walk from Cardinals starter Lance Lynn the previous inning, helping set up Stephen Drew’s tying sacrifice fly.

Felix Doubront won in relief of starter Clay Buchholz. John Lackey made a rare relief appearance to set up for Koji Uehara’s save.

Game 5 is Monday night as Cardinals ace Adam Wainwright faces Jon Lester in a rematch of the opener when Boston romped. It’ll be a busy sports day in downtown St. Louis with the NFL matchup between the Rams and Seattle a few blocks away.

He singled, doubled and walked his first three times up, making him 7 for 10 in the Series. He’d also reached base in 11 of 15 plate appearances.

Ortiz hollered to the Boston bench when he doubled in the fifth, as if trying to wake up the weak-hitting Red Sox, and later hustled home on Drew’s fly to make it 1-all.

Before the sixth, Ortiz gathered his teammates in the dugout and urged them on.

Lynn retired the first two batters in the sixth before Dustin Pedroia singled. Lynn wanted no part of Ortiz and walked him on four pitches.

Maness relieved, and Gomes connected on a 2-2 pitch. Maness doubled over near the mound while Gomes circled the bases. AP