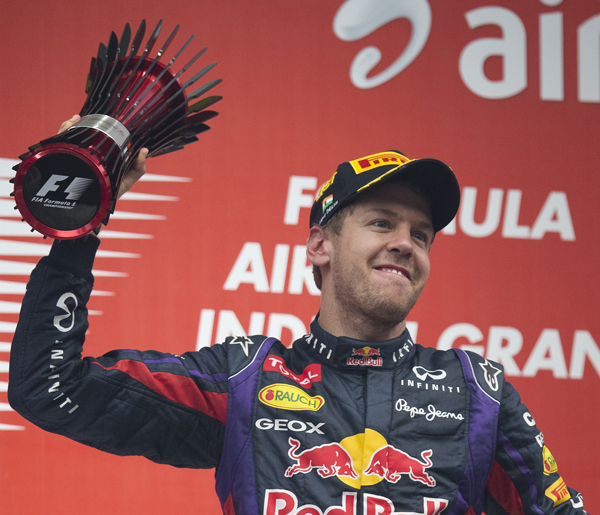 GREATER NOIDA, India - He drives with the poise of a seasoned veteran but Red Bull’s Sebastian Vettel says he’s still too young to appreciate his fourth straight Formula One championship title.

Starting from pole, the 26-year-old Vettel turned in a trademark clinical performance to win the Indian Grand Prix on Sunday and join F1 greats Juan Manuel Fangio and Michael Schumacher as just the third driver to win four consecutive championships. The only other driver to win four titles was Alain Prost.

“I’m way too young to understand what it means,” he said of his achievement. “I might be 60 one day, maybe then I will understand, but nobody cares anymore. I care. It’s difficult to realize something that nobody can take away from you, basically.”

As in the past two years in India, Vettel won from pole position, finishing almost 30 seconds ahead of Mercedes driver Nico Rosberg in second, with Romain Grosjean taking his second straight third place for Lotus after starting from 17th on the grid.

After taking the checkered flag, Vettel performed several doughnuts on the track before climbing from his car, acknowledging the crowd and kneeling with his head bowed to the track. He then climbed the pit lane fence to embrace members of his team.

Vettel has now won 10 races this season, including the last six.

A clearly emotional Vettel, taking occasional swigs from his celebratory magnum of champagne, thanked his team and his family in a post-race media conference.

He spoke of his respect for the Indian people and rivals including Alonso, Lewis Hamilton and Webber.