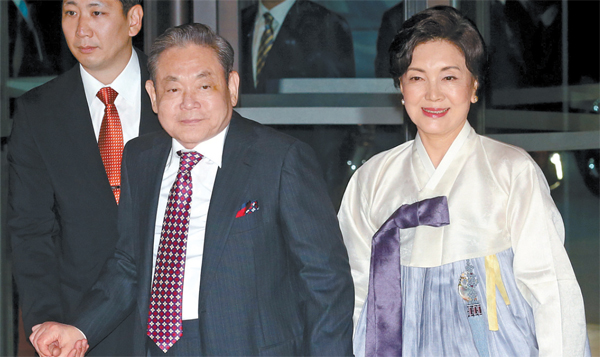 Samsung Electronics Chairman Lee Kun-hee and his wife, Hong Ra-hee, director-general of the Leeum, Samsung Museum of Art, arrive at the Hotel Shilla yesterday to attend an event to mark the 20th anniversary of Lee’s Frankfurt Declaration of New Management. [NEWS1]

Arguably the biggest success of Samsung Group is not semiconductors or displays or even the smartphones that have put the brand among the most famous and appreciated in the world.

Those products, analysts say, are merely the fruit of the group’s biggest achievement: a continuing sense of crisis that many industrialists in history have tried to inculcate in their companies. Few have done it so well as Samsung’s Lee Kun-hee.

Yesterday, the group hosted an event to commemorate the 20th anniversary of the so-called Frankfurt Declaration, in which Lee’s call for a crisis-conscious business management philosophy, named New Management, began the strenuous and extraordinary transformation of a B2B parts manufacturer into a trendsetting global leader.

Around 350 people, including Samsung Electronics Chairman Lee, his son and heir-apparent Jay Y. Lee and many other members of the family, attended the event at the group’s Hotel Shilla in Seoul. Also present were presidents and vice presidents of the group’s affiliates and representatives of its partner companies.

According to the group, the event was also meant to show the outcome of two decades of New Management, which has played a crucial role in transforming Korea into a major economic player in the world. Korea’s Gross Domestic Product has grown from $372.2 billion to $1.13 trillion over the past 20 years - and Samsung accounts for more than 30 percent of it.

The top leaders of the group also pledged to do even better in future, including Chairman Lee, who delivered his message through a video.

“We should not be complacent and be armed again with a sense of crisis,” Lee said. “We need to be a management that thrives on innovation, autonomy and creativity, that accepts challenge and is not afraid of failure.

“There are social expectations on us,” he continued. “We will take another first step toward becoming an eternal, super first-class corporation that can’t be shaken by any obstacle. Once again, we will move strongly.”

The event was held as Samsung Electronics, the group’s flagship, is enjoying unprecedented success.

The stock price of the tech giant yesterday rose 2.3 percent to the highest level since June after several local brokerages raised their profit estimates.

Last year, Samsung broke into the top 10 in the Interbrand Best Global Brands report, leaping eight places to be ranked ninth top brand in the world. This year, it went up another notch to eighth. Interbrand estimated Samsung’s brand value at $39.61 billion.

Rather than rest on their laurels, some Samsung officials say this is exactly the right time to worry about a crisis, and many market analysts agree.

Chairman Lee stressed crisis when the company was enjoying earlier success, such as during the 10th anniversary of the Frankfurt Declaration and the advent of New Management.

He also stressed a crisis mentality when he returned to the helm of Samsung in 2010, saying most of the businesses and products that represent Samsung at that time could disappear 10 years later.

“I am nervous at the feeling that we may lag behind within several years or 10 years if we stay complacent,” he said while attending the Consumer Electronics Show in Las Vegas last year. The company, started in Daegu in 1938 by the chairman’s father, Lee Byung-chull, has not always grown out of crisis.

Lee Byung-chull founded Samsung on March 22, 1938. The company had 40 employees crammed in a small office with only one telephone. It sold a brand of noodle called Star Noodle. Its capital was 30,000 won.

After Korea regained independence from Japan in 1945, Samsung expanded into sugar, fabric and trade as the country was about to start its industrial transformation.

Korea needed big companies for that and Samsung expanded into many businesses. Samsung Electronics was founded in 1969 and finance and heavy industries were added to the group in following years.

But the group’s owners and its executives knew that growth could be limited with complacency and timidity. Lee Kun-hee, who took the helm after his father’s death in 1987, knew how to promote awareness of that.

On June 7, 1993, at an emergency executives meeting in Frankfurt, Germany, he told his assembled managers: “Change everything except your wife and children.”