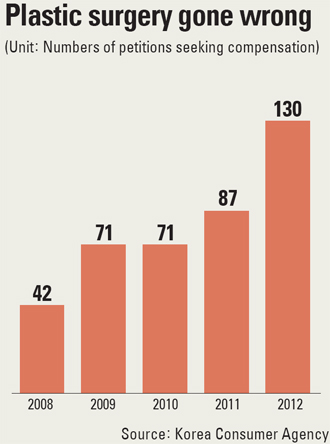 The death of a female university student is the latest incident in a series of medical accidents that have overshadowed Korea’s reputation as a global leader in plastic surgery.

The case marks the third death this year related to plastic surgery.

According to the Haeundae Police, a 22-year-old patient lost all brain function shortly after operations to alter her nose and jaw on Oct. 17 at a clinic in Busan.

Following the procedures, the patient appeared fine and interacted with her family normally, police said, before suddenly losing consciousness. She was rushed to a nearby hospital but died on Oct. 26. Her death has prompted an investigation, and police said an autopsy will be performed.

Earlier in July, a woman fell unconscious while undergoing a cosmetic procedure at a clinic in southern Seoul. She died one month later. And in March, a 22-year-old woman died from complications after being administered anesthesia at a clinic in North Chungcheong. She was moved to a nearby hospital but died shortly thereafter.

As the number of plastic surgeries has risen in Korea, so too has the risk for accidents. According to the International Society of Aesthetic Plastic Surgery, 650,000 plastic surgeries were performed in Korea in 2011. But experts also point to lax regulations and inadequate facilities as cause for concern.

About 839 out of 1,091 cosmetic surgery clinics nationwide lack proper emergency medical equipment, according to an assessment by the Health Insurance Review and Assessment Service. And many clinics go without hiring anesthesiologists or trained professionals to cut costs.

By law, any doctor with a medical license can perform a cosmetic surgery, even if he or she does not specialize in the field. The clinic in North Chungcheong, where one patient died in March, did not have a specialist.

And as accidents have increased, more patients are claiming compensation for botched procedures. According to the Korea Consumer Agency, 42 petitions were filed in 2008 to seek compensation for damages from plastic surgery. That number increased to 130 last year.

On Sunday, the Seoul Central District Court ruled in favor of a 31-year-old woman whose face was paralyzed after a cosmetic surgery. She was awarded 29 million won ($27,338) in compensation.

Earlier this month, the same court ruled in favor of another patient, who lost her vision during a cosmetic operation on her face. She was awarded 850 million won in compensation.

Lee Sang-yun, a researcher with the civic group Center for Health and Social Change, said that clinics are often negligent about informing patients about the serious risks involved and possible outcomes.

“Instead of doctors, only coordinators and counselors talk to patients to encourage surgery,” Lee said. “There must be a regulation that requires a doctor to explain all the side effects from the procedure, and a patient must be given [adequate time to consider all the possibilities involved] before making a decision.”