Investment executive talks about what’s next

Investment executive talks about what’s next 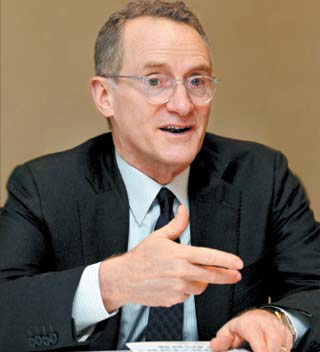 Considering the three stages of a bull-market cycle, Korea is at the beginning of the second phase, when most investors realize improvement is taking place, said Howard Marks, chairman of U.S.-based Oaktree Capital Management.

“I believe Korea is at the beginning of step two,” Marks said yesterday at a media roundtable in central Seoul. “Economic progress is being made and results are coming in better than expected.”

Marks was in town on a regular visit to meet with Korean institutions and clients. Oaktree Capital Management, which looks after assets for states in the United States, corporations, universities, foundations and sovereign wealth funds, recently announced a joint venture with the National Pension Service. It also has entered into a joint venture with TCK to engage in private wealth management.

“The real important thing ... is the relationship between facts and expectations,” he said. “I believe expectations for Korea have been modest. That creates an environment in which facts can come in stronger and present a favorable surprise.”

Marks’ comments were made at a time when recent figures from the Bank of Korea show gross domestic product jumping more than 1 percent in the third quarter from the previous three months and facility investment on the rise.

He also shared his views on investment strategies amid lingering uncertainty in the global economy and low interest rates. For example, investors are unsure whether or not the United States will recover to prior levels of GDP growth, unemployment, profit margins, interest rates and business investment, Marks said. He also noted uncertainties about what the future holds for Europe and restraints on growth and financing in China.

Marks is the author of a book titled “The Most Important Thing,” based on his 45 years in business.

“Today, the outlook is not so good and assets are not so cheap that we should invest aggressively,” Marks said. “But at the same time, conditions are not so bad and prices are not so high that it’s time to be extremely cautious. And that’s the reason for my own personal mantra, move forward but with caution.”