Korea inches up to seventh in rating by World Bank

Korea inches up to seventh in rating by World Bank 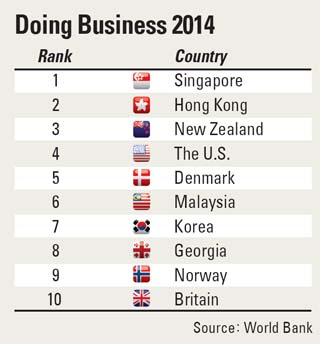 Korea ranked seventh among 189 countries in an evaluation of its business environment by the World Bank.

The ranking rose one notch from last year, the highest mark given to the country since 2003.

According to the Ministry of Strategy and Finance yesterday, the World Bank gave Korea high points for its systems and infrastructure, resolving legal conflicts, electricity connection, and international trade and education, while finding it lacking in protections for intellectual property and foreign investors.

The country has been on the top 10 list for three consecutive years, the ministry said.

Among Group of 20 nations, Korea was second to the United States. It was fourth among OECD countries.

The organization put Korea in sixth place on its home page last year, when the assessment was made on 185 countries, before four more were added to the list.

Korea got the best evaluation among Northeast Asian countries. Japan fell from 24th to 27th, while China declined from 91st to 96th.

Korea’s ranking climbed owing to improvements in eight areas, including the environment for start-ups and reduced costs to win approval for construction, the ministry said.

“The ministry will learn from examples of other countries and try to improve the vulnerable areas pointed out by the World Bank,” an official at the ministry said. “It is important to make improvements that businesses can actually feel.”