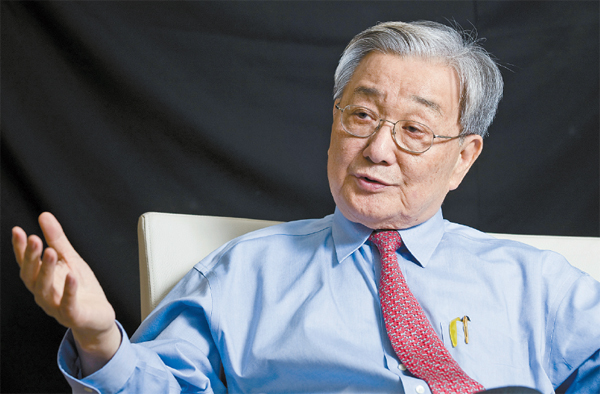 In June 1970, Hong Waun Ki, then a 28-year-old doctor, said farewell to his family and friends and left Korea for the United States. He left with only $451 in his wallet, his medical books, some clothes and his wife, who was six months pregnant.

Forty-three years later, the American dream has come true for Hong, now the division head of cancer medicine and a professor at The University of Texas MD Anderson Cancer Center in Houston.

Last Monday, Hong was elected a member of the Institute of Medicine. The distinguished medical scholar group only welcomes 70 new members a year, and of its 1,753 members only a few are of Korean descent, including Jim Yong Kim, president of the World Bank, and Kim Sung-wan, a professor at the University of Utah.

Hong graduated from medical school at Yonsei University in 1967. After going to the United States in 1970, he worked at Bronx-Lebanon Hospital, Boston Veterans Affairs Medical Center and Memorial Sloan-Kettering Cancer Center before coming to MD Anderson Cancer Center in 1984.

He now oversees 17 departments and 350 professors in a center that cares for 12,000 cancer patients a year. These days he spends most of his time helping his junior professors' research and cares for only a few special patients.

Hong, who has authored some 700 research publications, is known for developing a treatment for laryngeal cancer that does not require cutting the vocal cords, preserving patients' ability to speak and swallow.

The former president of the American Association for Cancer Research, Hong has won a long list of cancer-related awards and honors. But Hong still goes to hospital around 5 a.m. most days. He says he learned that the U.S. is a country where opportunity comes to people who put in their best effort.

Earlier this month, Hong visited Korea in order to help Yonsei University set up a cancer center. In an interview with the JoongAng Ilbo, the doctor said that what makes his life worth living is being able to lead and develop in fields no one has explored yet.

Q. Why did you decide to become a doctor?

A. I received lot of influence from my family. I was the sixth of seven brothers and sisters. My uncle was a doctor of oriental medicine, while my oldest brother, a doctor who graduated from medical school at Yonsei University, was my role model. When I went to same school he was very proud. At that time, my oldest brother was a professor at the university. The tuition in the 1960s for medical school was very expensive, but he paid all the tuition. Unfortunately, he passed away early, but he was one of the three people who saved my life.

In the 1970s, medicine was still a respected profession in Korea. So why did you decide to move to the U.S.?

I wanted to see the bigger world. In the 1970s, the gap between Korea and the U.S. was very big. When I finished my military duty as a medical officer in the Air Force, I wanted to continue my studies, and I thought there would be more opportunities in a big country like the U.S.

Immigration law changed at that time, and people with jobs like doctors could get immigrant visas easily. But the problems started when I landed in the U.S. I had a very hard time both physically and psychologically. It was very difficult for foreigners to get a position in the U.S., from intern to resident.

You have written 700 research papers. How did you manage to do that?

I just want to take this opportunity to say something to my junior doctors: there are no shortcuts in learning. The only way is to have patience and passion and keep going steadily. There will be difficult and painful moments, but you have to endure.

In addition, a doctor is not a businessman. The medical world is different from the financial world, like Wall Street. If you are more into making money, you should go into something else.

Prevention precedes treatment in cancer. What do people need to be aware of?

Eating habits are most important. Eat less red meat and center meals around vegetables and fruits. Smoking is the biggest enemy for your health. One out of three cancer patients get their cancer from smoking.

It is especially bad to combine smoking with alcohol. About one or two glasses of wine with dinner is appropriate when you drink alcohol. Exercising regularly is also important. I didn’t learn to play golf, but I do play tennis.

What do people have to do when they get cancer?

They don’t have to lament and despair. It is important for them to go to the doctor and get treatment. As cancer treatment methods have been developing, the survival rate for cancer patients has been going up.

Roughly half of cancer patients survive these days. Patients need to have hope.

In Korea, some cancer patients are more inclined to try alternative treatments, like herbal medicine, rather than going to a hospital. What do you think?

I think it is big mistake just to rely on alternative treatments unless a patient is receiving treatments from a doctor at the same time. Patients should not be credulous just because they're depressed about having cancer.

Is there a big gap between Korea and the U.S. in cancer treatment?

Not really. Korean hospitals’ treatment quality is very high as joint research projects and good medicine has been introduced. However, there is a big difference between Korea and the U.S. in the size of cancer research funds.

Conquering cancer has long been a dream. Will that day come?

Cancer will not be completely vanquished, but there will be fewer patients dying from cancer. I think we are not far from the day when cancer could be manageable, like diabetes, high blood pressure and heart trouble.

Diabetes and high blood pressure are not completely curable, but there isn’t much of a problem if people take their medicine and manage themselves. For cancer, it is curable in early stages, but gets difficult as it goes to later stages. In this case, we can suppress the propagation of cancer cells with medicine and careful treatment, so people can live without a big problem.