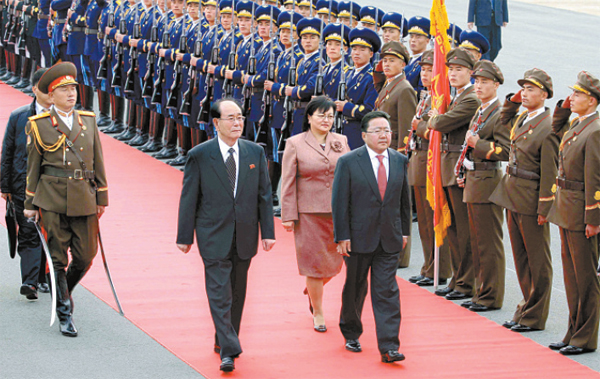 The president of Mongolia, Tsakhiagiin Elbegdorj, is the first foreign head of government to make an official visit to North Korea under the rule of Kim Jong-un.

As of press time, North Korean media did not say whether the Mongolian president met with Kim or not. His visit celebrated the 65th anniversary of bilateral relations between the two countries.

Elbegdorj left for Pyongyang on Monday, according to the Mongolian government’s Web site, leading a delegation of high-ranking Mongolian officials, including the country’s foreign minister. He arrived at Pyongyang Sunan International Airport, according to the North’s official Korean Central Television, and was welcomed by Kim Yong-nam, chairman of the Presidium of the Supreme People’s Assembly.

Elbegdorj had a group discussion with Kim Yong-nam and other North Korean officials at the Mansudae Assembly Hall in Pyongyang on Monday, Rodong Sinmun, the ruling party newspaper, reported yesterday.

“At the talks, both sides exchanged opinions on matters of mutual interest and on how to develop bilateral relations,” the Rodong Sinmun reported.

At the Mansudae discussion, Elbegdorj said that “peace and stability in Northeast Asia is particularly important to Mongolia and North Korea,” and “Mongolia will cooperate with all of the concerned countries including [North Korea] for the mutual interests of stability, security, prosperity and development of Northeast Asia,” according to KCTV.

Under Kim Jong-un’s rule, Choe Thae-bok, chairman of the Supreme People’s Assembly, visited Mongolia in 2012 and met with Elbegdorj.

Mongolia has shown an interest in the port of Rajin at the northeastern tip of North Korea. China’s Xinhua News Agency reported in November 2012 that the Mongolian government wanted to rent the port in order to export its natural resources.

Ku Pon-thae, vice-minister of foreign trade, publicly said in a speech at a forum in China that North Korea was “negotiating with Mongolian companies over the Rason Special Economic Zone, including investment and communication infrastructure in the zone.”

On Nov. 21, 2012, North Korea’s Choson Sinbo, a mouthpiece of North Korean residents in Japan, said on its Web site that “Rason is the most convenient way for Mongolia to reach to the sea and geographically important for it to trade with other countries.”