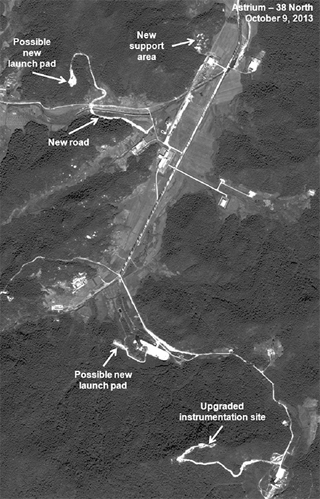 This Oct. 9 satellite image taken by Astrium, and annotated and distributed by 38 North, shows the Sohae Satellite Launching Station, where North Korea launched a long-range rocket into space in December. A U.S. research institute said North Korea is conducting major construction there. [AP/NEWSIS]

The findings are based on analysis of Oct. 9 satellite imagery of the Sohae Satellite Launching Station where the North launched a long-range rocket into space last December in defiance of a UN ban on its use of ballistic missile technology.

The U.S.-Korea Institute at Johns Hopkins School of Advanced International Studies said Monday that a possible new launch pad for mobile missiles is being constructed and could be completed by mid-2014. A separate launch tower used for December’s launch is also allegedly being upgraded, possibly to handle larger rockets.

It is the latest sign North Korea is advancing its weapons programs despite saying it wants to resume disarmament negotiations. AP