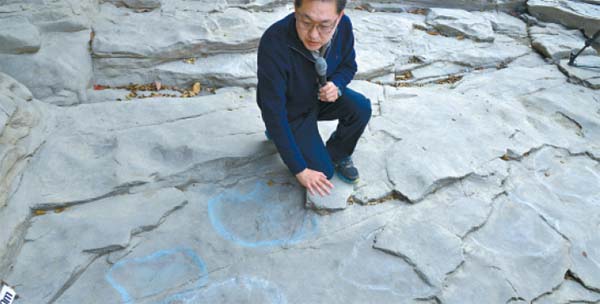 Im Jong-deok, of the National Research Institute of Cultural Heritage, announced the discovery of dinosaur footprints found on the Bangudae rock engravings in Ulsan. The 25 footprints are believed to have been made by herbivorous dinosaurs around 100 million years ago. [NEWSIS]

Dinosaur footprints from the Cretaceous period, around 100 million years ago, have been found in Ulsan, the southeastern part of the Korean Peninsula, the National Research Institute of Cultural Heritage announced yesterday.

This isn’t the first time dinosaur footprints have been discovered in Korea, but the announcement has attracted significant attention from the government and the media because of where they were found: on the surface of the 8,000-year-old Bangudae Petroglyphs.

The Bangudae rock carvings, which feature some 300 sea creatures and other animals, have been making headlines for a decade, as they spend 140 days a year submerged because of policies put in place after the construction of Sayeon Dam in the 1960s.

After prolonged bickering, the Cultural Heritage Administration and the city of Ulsan finally agreed in June to build a movable dam in front the prehistoric engravings.

The footprints were discovered as the National Research Institute of Cultural Heritage began an archaeological excavation of the site in August to prepare for the construction of the dam.

The Cultural Heritage Administration said that it will continue with the archaeological excavation and decide on the best way to preserve the recently found footprints after meetings with experts. There are nine sites across the country where dinosaur prints have been found and have since been designated as natural heritage sites. In Ulsan alone, there are 16 places where dinosaur footprints were found, 12 of which are near the Bangudae Petroglyphs, and two of which are Ulsan-designated cultural properties.

The engravings on the rock face of Bangudae Cliff, which measure 10 meters wide (32 feet) and 4 meters high, were first discovered in 1971 by a team of experts from Seoul’s Dongguk University. In addition to featuring sea creatures and animals, the engravings also depict early man hunting whales, which experts say are likely the oldest petroglyphs to illustrate such activity.