Remote medical care by smartphone to be legal

Remote medical care by smartphone to be legal 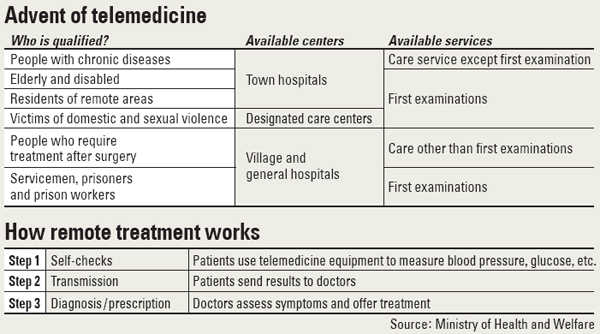 The Ministry of Health and Welfare said yesterday it will allow doctors to perform remote-patient monitoring and treatment via telecommunications technology in 2015 to extend care to patients in far-flung areas.

Remote monitoring is allowed for a limited number of diseases, but the ministry prohibits health care professionals from delivering treatment via telecommunications.

“The advancement in technology signals that it’s high time to embrace telemedicine,” said Kwon Deok-cheol, a director of the ministry’s health care policy division, during a briefing. “Remote treatment will give us greater access to people in remote areas. It can also help doctors better assist patients diagnosed with chronic diseases such as diabetes and high blood pressure.”

But the Health Ministry limited the use of the technology to smaller-scale hospitals, prohibiting big urban general hospitals and university medical centers from offering the services.

The restriction is aimed at preventing big hospitals from eroding the profits of smaller hospitals and clinics.

But when it comes to treating military servicemen or prison workers, bigger hospitals are allowed to offer telemedicine services.

The ministry also identified the scope of those who are eligible for the new services: patients who require constant long-term care after being diagnosed with chronic diseases such as diabetes, high blood pressure or mental diseases; old or disabled people living in remote rural areas; victims of domestic and sexual assault; people serving in the military; those working in prisons; and prisoners themselves.

And yet, an initial examination should be carried out in person, except for old or disabled people who are unable to move freely.

Waivers are also given to people living in remote rural areas, including servicemen and prison workers.

The ministry noted that a total of 30 pilot telemedicine projects are underway across the country, offering care to far-flung branches of the National Police Agency, the Korea Coast Guard and regional probation centers.

The ministry also described some of the advances in telemedicine technology. It detailed a device that can measure blood pressure - including the heart rate and systolic and diastolic blood pressure levels - and wirelessly transmits the data to a telemedicine monitoring center through telemedicine gateways.

The gateway system consists of videoconferencing equipment, enabling doctors to see and hear patients, along with the diagnostic information generated by telemedical instruments.

The ministry added that evolving Web platforms will be able to bring telemedicine patients and doctors together in a more dynamic and interactive way in the future.

Despite the promising features described by the ministry, critics say that remote medical systems will give a big, competitive edge to larger hospitals because village hospitals are unable to purchase expensive telemedicine equipment.

Skeptics also raised concerns that remote health care services will never be as good as face-to-face consultations and treatment.

The Health Ministry said there was room for improvement in the bill it intends to send to the National Assembly and that it will consult with health care professionals to come up with a final draft.

“We will announce the final draft as early as December,” a representative of the ministry told the Korea JoongAng Daily. “Before that, we will review more references and receive consultations from experts.”