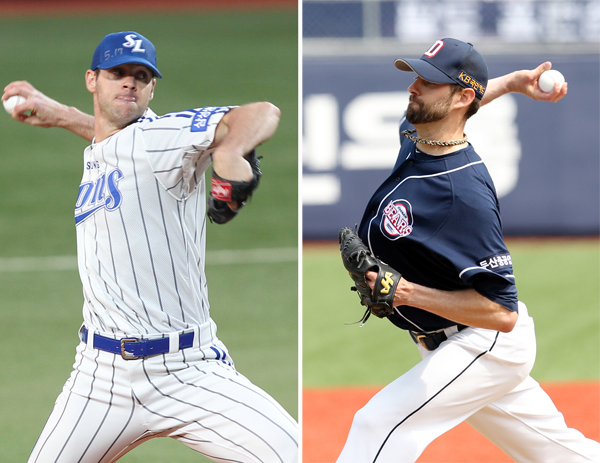 The destiny of the Samsung Lions and the Doosan Bears, who are battling for the 2013 Korean Series title, rests on the shoulders of two foreign pitchers. Rick VandenHurk will start for the defending champion Lions, who trail the Bears in the best-of-seven series, 3-2, and Dustin Nippert will be on the hill for Doosan in Game 6, which will be held in Daegu at 6 p.m. today.

Both pitchers started Game 2 and performed well. VandenHurk struck out seven hitters without allowing any runs, while giving up only four hits in five and two-thirds innings. Nippert also didn’t give up a run while allowing only three hits in six innings.

Lions skipper Ryu Joong-il grappled with whether he would start the 27-year-old right-hander as he threw 28 pitches as a reliever in Game 5.

“He strongly wanted to start the game, and I was able to see his fighting spirit in his eyes,” Ryu said. “And I think he will give some trouble to the Bears hitters, who have struggled with his hard fastballs.”

Nippert will be on the mound after five days of rest. He threw 100 pitches in Game 2.

“The reason I didn’t utilize him as a reliever was because he has to pitch many innings in Game 6, the most important game that might determine the winner of the series,” said Bears skipper Kim Jin-wook. “If we lose on Thursday, it would be very hard for us to win the series because many of our players are injured and tired.”

The key for the Lions is offense. They averaged only six hits from Game 1 to Game 4 with a batting average of .175. But the Lions’ hitters have awakened. They had 11 hits and scored seven runs in Game 5 on Tuesday. Slugger Choi Hyung-woo led the offense with three hits, including a solo home run, while third baseman Park Suk-min had two hits and an RBI, and first baseman Chae Tae-in also hit a solo home run.

Their biggest worry on offense is veteran slugger Lee Seung-yeop, the sleeping “Lion King” who is hitting only .158 (3 for 19) in the series. He singled to left field in the top of the first inning in Game 5, but struck out in the third and fifth innings, then flied out to center in the seventh and walked in the ninth inning.

“He will get better,” Ryu said when reporters asked whether Lee will get more chances to play. “I trust him because he always has done something huge whenever the team was in a tough situation.”

In the 2002 Korean Series against the LG Twins, Lee was hitting 2 for 20, but led the team’s Game 6 victory with a game-tying three-run home run in the bottom of the ninth inning.

The leadoff spot is also a headache for the Lions. Center fielder Bae Young-seob, who took the spot from Game 1 to Game 4, was hitting only 1 for 16, so skipper Ryu replaced him with Jung Hyung-sik in Game 5, but Jung went hitless.

Along with Choi, first baseman Oh Jae-il contributed some big hits. He is hitting only 2 for 9 in the series, but those two hits were good enough to get him into the starting lineup. In the top of the 13th inning of Game 2, Oh hit a go-ahead home run off the league’s best closer, Oh Seung-hwan, and doubled in two runs to tie the score in the bottom of the third inning of Game 5.

“Because our pitchers are tired, hitters like Choi should produce some runs in the early innings,” said Bears skipper Kim.

The question is whether Kim will utilize his lefty starter, Yoo Hee-gwan, who only threw 52 pitches in Game 2, as a reliever in Game 6. “If we lose Game 6, it will be very hard for us to win the series.

“We have to consider every possible option we can use to finish the series on Thursday.” Yoo allowed two runs in three and two-third innings while striking out one batter.