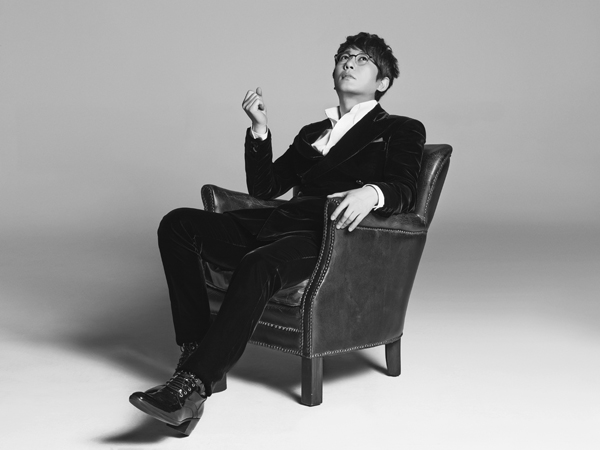 When singing icon Shin Seung-hun, a balladeer who has sold more than 10 million albums over his 23-year career, met journalists to promote his most recent release, the mini-album “Great Wave,” the questions he received were quite different from usual.

Rather than queries about his latest songs, his coming concert in November, or all the fans who lined up to purchase his new CD on the morning of its release, the first question was whether he deliberately threw a recent TV contest.

On Oct. 19, the 45-year-old singer appeared on JTBC’s “Hidden Singer,” a program where a famous performer and several imitators sing while hidden behind a curtain, out of view of the audience, who must guess who is the professional and who are the fakes.

For 16 episodes, the real singer won every time. But for Shin’s episode, for the first time, the audience voted for an imitator. People were so shocked that they wondered if he deliberately sang differently to try to add to the drama of the episode.

“I participated in the program thinking that it would be exciting to watch, even if I don’t win the competition,” said Shin, adjusting his horn-rimmed glasses with a pleasant smile on his face. “I just sang casually, without trying too hard.”

“But now my name will get mentioned every time an original singer gets defeated by an imposter on the program,” he continued. “They’ll think, ‘Even Shin Seung-hun was defeated, so it’s all right.’ It would be wonderful if I can be a comfort to them in such a way.”

Shin says his parents were the only ones who gave him a pat on the back after the surprising defeat.

“They called me a devoted son for being the first singer to lose the competition,” he said.

“They said they wanted to see an ordinary person, who might be one of my fans, as he is such a good imposter of mine, take the honor of winning the competition and receiving the prize money of 20 million won [$18,850]. They congratulated me and said I did a great job.”

Debuting in 1991 with the song “You, Reflected in a Smile,” Shin has enjoyed immense popularity from the start, earning the moniker “the emperor of ballads.”

But, now, the king of ballads wants to “wrap up the first act” of his career and open up the second act with “Great Wave.” “Great Wave” is the last release in a trilogy of mini-albums, which started with “Radio Wave” in 2008, and continued with “Love O’Clock” in 2009.

Shin’s last full-length album was “The Romanticist,” his 10th, which was released in 2006.

“I’ve been releasing regular albums every one-and-a-half to two years since my debut,” he said. “When I thought about releasing my 11th, I hesitated for a bit. I felt like I had to catch my breath. Moreover, my album sales had topped 10 million, and there’s a saying that when a singer’s sales go over 10 million, listeners start to get tired of the singer’s voice. It’s not only stale to their ears, they don’t even bother to appraise the new songs or the album. It’s like, ‘That’s just Shin Seung-hun.’ I didn’t want to hear that.”

The Korea JoongAng Daily sat down with Shin last week in a restaurant in Itaewon, central Seoul. Here are some excerpts from the interview.

Q. Your coming concert, “The Shin Seung Hun Show,” on Nov. 6 is drawing attention because you’ve said it will be an unprecedented concert and that you’ve been preparing for nearly seven months just for this show.

A. “The Shin Seung Hun Show” has been the name of my concerts since 2004, and I’ve staged more than a thousand. This moment in my career is when I wrap up Act 1 and open Act 2. So this “Shin Seung Hun Show” will be “the show,” to display my 23-year career to my fans and give a glimpse of my next chapter. There’ll be collaborations with other artists, including Ra.D, Verbal Jint and many more. There’ll be a full orchestra on stage, and I’ll also invite the imposters who mimicked me on “Hidden Singer” to show them what my real voice sounds like. It’ll be like no other concert I’ve done so far.

You are known to have focused on music for the past 23 years, not appearing television ads or drama series. You only appear on entertainment programs that relate to music. Why?

I don’t “also” do music. I “only” do music. There needs to be some people who are multitaskers and can be a singer, an actor and a comedian, but there also needs to be those who only do music and that’s me.

I’ve been famous since my debut, so I’ve always known I could only go downhill. I needed to make my wings larger, so that even though I fall, I can fall slowly, quietly, without catching everyone’s attention.

You know, sparrows with tiny wings need to flap their wings, causing a great noise, to stay afloat in the air.

People say that you’ve established a training center to foster artists of your own.

The construction of the training center was recently completed. There are five rooms and I’ll be teaching the students myself, not voice teachers. I want to help students preserve their own styles. If they come in “red,” for example, I don’t want to add blue and turn them into purple.

If they are red, I will make them look more red and bright. It’s sad to see so many trainees getting their colors tainted. The new artist development team auditioned 500 people and I selected about three.

Now, I’m quite busy with my coming concert, but when I’m available I’ll be teaching about eight students to start off.

I decided to teach students myself because until recently I thought I had no talent for teaching. But after experiencing teaching through programs like “The Great Birth” and “Voice Korea,” I gained confidence.

Moreover, whenever I watched music shows on television, I complained that there were so many “idol” groups and not so many ballad singers or bands. But I realized that I shouldn’t just grumble while doing nothing.

Now I think I am in a position to bring about a change and support young musicians. There are millions of songs that I wrote over the years, sitting on my hard drive, unopened. I didn’t use them because they don’t suit me, but I’ll be looking for students to give those songs to.

So in the next chapter of my life, I’ll still be a singer, but also a producer, a teacher, and maybe even a performance director. You never know.