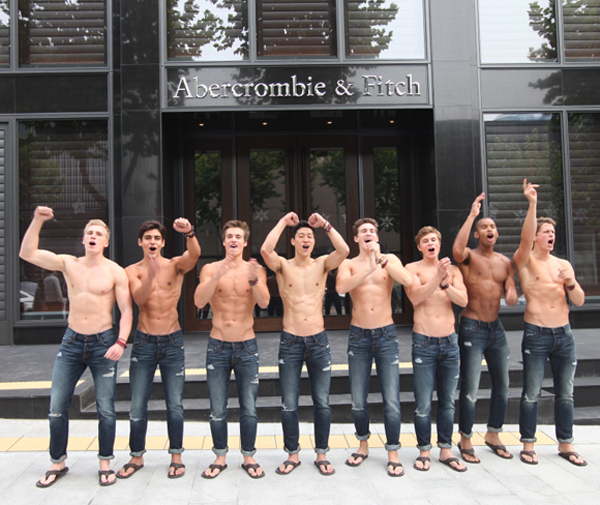 If you judge the popularity of a clothing brand by its number of counterfeits, Abercrombie & Fitch is probably one of the most popular brands in Korea. Even before its official opening here, countless hoodies, T-shirts and jackets bearing the brand’s logo could be seen everywhere. But without an official outlet, consumers had to be careful whether their purchases were genuine Abercrombie & Fitch products or just knockoffs.

Fear no more, though. Abercrombie & Fitch opened its first store in Korea today, in the posh neighborhood of Cheongdam-dong in southern Seoul.

Given how popular the brand is among young Koreans, why did it take so long?

“We always try to find out the perfect location for our store and sometimes it takes a little bit longer,” said Michael Scheiner, the Ohio-based company’s head of marketing.

The Abercrombie & Fitch store is located on the same street as many top luxury brands, such as CH Carolina Herrera, Prada and Louis Vuitton.

But aside from the upscale location, everything else about the store is the same as Abercrombie & Fitch’s American stores, be it the way employees greet costumers by saying “What’s going on?,” the upbeat music, or the way they display the clothes inside the dimly-lit store.

Expect to find the full range of Abercrombie & Fitch products - shirts, pants and outerwear, and also colognes, lotions and other beauty products.

Unlike many fashion brands, which typically allow returns and exchanges within 30 days of purchase, Abercrombie & Fitch refunds any merchandise in resalable condition as long as they still bear price tags and you have a copy of the receipt.

With the launch in Seoul, the company said it plans on hiring 270 local employees in Korea.

First launched in 1892 in New York, Abercrombie & Fitch has grown into a fashion giant, although it has been criticized in the past for selling products with racist slogans, hiring only Caucasian salespeople and not offering plus-size clothing.