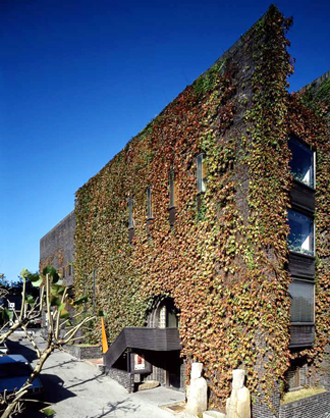 The fate of one of the most important structures in the history of Korea’s modern architecture will be decided soon. The conspicuous and beautiful head office of Space Group, nestled in the quiet and historic neighborhood of Wonseo-dong, beside Changdeok Palace in central Seoul, will go to public auction next month.

The sale comes after the legendary 53-year-old architecture firm declared bankruptcy in December and went into court receivership in January.

Space Group was founded by Kim Swoo-geun (1931-86), who, along with Kim Chung-up (1922-88), represents the first generation of modern architects in Korea. Experts say those first-generation architects struggled with two major tasks: one, becoming independent from Japanese styles in the wake of Japanese colonial rule (1910-45); and, two, merging Western modernism into Korean traditions in an era marked by the Cold War and Korea’s fast-paced development.

And the unusual complex of Space Group’s head office, in fact, represents those struggles.

The complex is a mix of buildings. There is a hanok (traditional Korean house), overshadowed by a looming, ivy-covered building of reddish-black bricks and another building made chiefly of glass.

The brick building was completed in 1972 from a design by Kim Swoo-geun. The glass building came later, completed in 1997 by Chang Sea-yang, a former CEO of Space Group. The hanok was rebuilt and enlarged by Lee Sang-leem, the current CEO of the firm, in 2000.

“Style” is the common word people who knew Kim would use when they talked about the late architect. He knew style and frequently talked about it.

“Style can mean many things,” Kim was known to have said. “It can refer to our mental structure that doesn’t like inhumanity. It can also refer to our natural tendency to prefer familiarity to precision.”

Although not all of Kim’s works are universally loved, many agree that his 25-year career set the tone for Korean architecture today and, most importantly, he was a fan and master of “space.”

Seung H-Sang - an internationally recognized, award-winning architect who was a student of Kim’s - told the Korea JoongAng Daily in an earlier interview that one of the biggest lessons he learned from Kim is that “architecture is not about structures, but really about space.”

“Kim was the first in Korea to promote such a concept - that the exterior of a building is just to cover up the space inside, and it is the space inside that’s the most important,” he said.

This is why the fate of Space Group’s head office, which embodies the lifelong philosophy of Kim, is drawing the attention of anybody interested in architecture, design, history or culture. 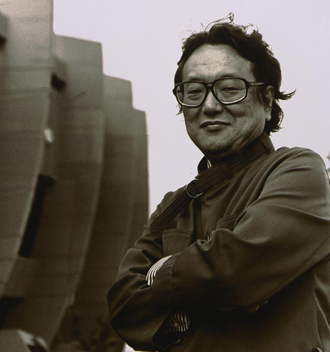 The Korean culture world was alarmed when news surfaced in January that Space Group had gone bankrupt, throwing the fate of two of Kim’s signature works into the air - the Space Group’s head office, which is often picked by architects as the most beautiful structure in Seoul, and Space Magazine, Korea’s oldest monthly magazine dedicated to the arts, which has been published by Space Group since 1966.

Architecture professors and culture journalists wrote columns in newspapers explaining why help was needed to keep Space Group afloat and preserve the building and the magazine.

At first, it looked like their calls would be heeded. In March, CNB Media, which has online and offline news media, took over the 47-year-old magazine.

“With the takeover, we were able to pay off debts worth 1 billion won [$940,746],” one representative of Space Group, told the DongA Ilbo. “The new publisher promised to maintain the magazine’s editing style as it is.”

More good news came the following month when the Seoul Foundation for Arts and Culture was discovered to have sent a letter of intent to Space Group to buy the office building, and Space Group sent a plan to restore operations to the court.

The news allayed concerns in the industry that if a private company purchased the structure, it could be altered or demolished altogether. Officials at the Seoul Foundation said that once the purchase was finalized, they planned to open parts of the building to the public as a culture center, as well as establish a memorial hall for Kim.

Above: The head office of Space Group from the outside. The building, which consists of a brick building, glass building and traditional Korean building, is often picked as the Korean architects’ favorite. Left: The inside of the building is filled with twists and turns with many experts saying “it looks like the building is playing with space,” a signature style of Kim Swoo-geun. [JoongAng Ilbo] Provided by Kim Swoo Geun Foundation

Sources confirmed earlier this month that several entities - including private companies like Hyundai Heavy Industries, NHN and a few other foundations - are discussing the purchase of the head office with Space Group.

This prompted some to speculate that the purchase would be concluded this month. However, shortly after, media reports surfaced that both Hyundai Heavy Industries and NHN had withdrawn, citing internal issues.

A representative with the Kim Swoo Geun Foundation told the Korea JoongAng Daily that the company expects the building to go to public auction by mid-November, and that it is the company’s official position that it “prefers a public foundation to buy the structure, rather than a private firm.”

He spent most of his youth in the Bukchon area, marked by a concentration of hanok and narrow alleys. Many say that this period impacted his design philosophies in later years, marked by mysteriously yet organically twisted spaces.

He came back to Korea in 1960, and since then, designed about 200 important structures across the country. They include Seoul Olympic Stadium (in Jamsil, southern Seoul), Freedom Center (in Namsan, central Seoul), Kyungdong Presbyterian Church (in Jangchung-dong, central Seoul), the South Korean ambassador’s residence in Washington, D.C., and Chuncheon Children’s Hall (Chuncheon, Gangwon), just to name a few.

Not all his buildings were acclaimed, though, with particularly heavy criticism falling on Buyeo National Museum in Buyeo, South Chungcheong, and Sewoon Plaza in Jongno District, central Seoul. The former is criticized for resembling a Japanese temple, while the latter was just detested by professionals and the public alike.

Still, his presence in the industry was quite strong. Space Group was nicknamed a “military academy” for Korean architects and many of Korea’s most famous architects - including Chang Sea-young, Min Hyun-sik and Seung H-Sang - were students of Kim’s.

In 1972, Kim opened Space Gallery within the head office, and five years later, opened Space Theater, becoming a popular hangout for the who’s who in the culture arena. The spot is also famous for being where the Kim Duk-soo Samulnori Team - lead by Kim Duk-soo, the renowned traditional percussionist - gave their first performance and Kong Ok-jin (1931-2012), a legendary Korean folk dancer, performed her “cripple’s dance.”

Unfortunately, some works by Kim, other than the head building of Space Group, are endangered as well.

One of them is Chuncheon Children’s Hall, one of Kim’s later works made in 1980.

The complex of low-rise, red-brick buildings looks small, innocent and delicate like children. In fact, Kim took on the project to mark 1979’s International Year of the Child.

However, for 20 years, the unusual-looking building was close to ruin - neglected by the city, it was filled with garbage and even suffered from a fire. But still, Chuncheon officials refused to take responsibility for the historic structure.

However, all changed earlier this year when KT&G, the leading tobacco company in the country, bought the building for 6.1 billion won with an aim to remodel it into a culture and arts complex, while keeping the original design as much as possible. Slated to open in April, the complex is expected to benefit from a nearby artist residence that will open soon.

“We are making a 200-seat concert hall for indie bands, as well as other cultural contents, like a photo gallery, a design shop and a cafe,” said Kim Il-gwon, KT&G’s visual arts team manager.

Another important building at risk isn’t even in Korea. The Korean pavilion from the Expo ’67 in Montreal, Canada is on the verge of being demolished. Officials at the Kim Swoo Geun Foundation say they have attempted to preserve the building, talking with the Canadian Embassy in Korea, but were told that the issue must first be raised by the South Korean Embassy in Canada.

As for the Space Group’s head office in Seoul, the Kim Swoo Geun Foundation has requested the Cultural Heritage Administration register the building as a modern cultural heritage site so that whoever buys it cannot alter the shape.

“As a modern cultural heritage site, a building must be more than 50 years old, so the building won’t be officially registered until 2022,” said Lee Kyung-taek, the foundation’s senior director. “However, even before 2022, we can pre-register the building to protect it.”

Kim Sung-hong, an architecture professor at the University of Seoul, pointed out in a column for the JoongAng Ilbo that Korea has long been neglectful of his architectural heritage: “It has been considered common sense to demolish structures, build larger ones and collect the profits from them. For decades, many modern cultural heritages buildings have been destroyed quietly as a result, and Koreans lamented only belatedly,” he wrote after learning of the bankruptcy.

“However, Korea has reached a place where it is capable - economically and socially - of transforming a masterpiece into a public asset,” he said.

1952 - Drops out of Architecture College at Seoul National University due to Korean War, moves to Japan

1961-1986 - Designs about 200 important structures across the country, leads culture movements by running a theater, gallery and arts magazine