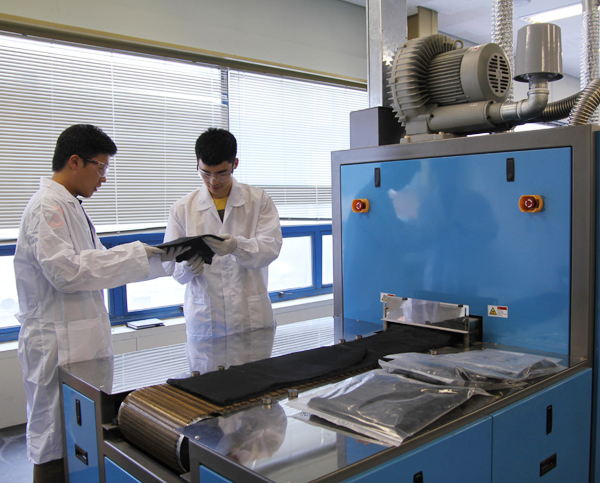 Researchers at the GS Caltex Central Technology R&D Center, located in Daejeon, are conducting research on carbon fiber. The prospective new material is four times lighter and 10 times stronger than steel. Provided by the company

GS Caltex, the nation’s second-largest oil refiner, has been steadily investing in R&D to acquire new future growth engines. The petrochemical company is looking to expand its product portfolio from its current foothold in petroleum and petrochemicals. The Central Technology R&D Center, located in the Daedeok Research and Development Special Zone in Daejeon, is playing a core role in its innovation process.

Developing new chemical materials is one of GS Caltex’s main strategies. In particular, the company named carbon fiber as the newly-developed material that deserves the most attention. At four times lighter yet 10 times stronger than steel, carbon fiber is a next-generation material produced by carbonizing the thread form of “pitch,” a residue left over in the petrochemical production process.

Carbon fiber is widely used in the automobile and aerospace industries due to its low weight, high strength and outstanding elasticity. Moreover, high oil prices and demand for environmentally-friendly materials are prompting the use of carbon fiber instead of glass fiber in the fiber-reinforced plastic industry.

Recently, GS Caltex signed an agreement with the municipality of Jeonju to create new carbon materials. The company already succeeded in developing and producing activated carbon fiber in April of this year and now plans to test-produce 60 tons of activated carbon fiber beginning next year. It will begin commercial production of the material by 2015.

The biochemical industry is another core area that GS Caltex has kept a keen eye on. Persistent efforts by GS Caltex’s Central Technology R&D Center led the company to be a pioneer in the industry.

Through its own research since 2007, GS Caltex has developed integrative technologies for the “fermentation, absorption and separate refinement” that is crucial for the mass production of biobutanol, a biochemical fuel. Biobutanol is an environmentally-friendly type of fuel produced with natural ingredients such as wood waste, rice straw, sugarcane and seaweed.

Often included in the three sources of bioenergy, along with biodiesel and bioethanol, biobutanol has been receiving attention for its efficiency. While biobutanol has a higher energy density than bioethanol, it has many similarities to gasoline. As a result, there is no need to alter existing transportation and storage facilities or renovate engines when using the fuel for automobiles.

Through joint research with the Korea Advanced Institute of Science and Technology (KAIST), Kwangwoon University and the Korea Research Institute of Chemical Technology, GS Caltex has created an essential technology that lowers the price of biobutanol to as much as 120 percent of that of gasoline. In this process, the company was able to apply for over 40 patents, both domestically and abroad.

Efforts by GS Caltex to strengthen its business capacities have also been wielding satisfactory results. In 2011, the company was the first in the oil industry to receive a $20 billion Export Tower Award from the Korea International Trade Association (KITA).

The company then performed even better last year, receiving the $25 billion Export Tower Award - the highest export award. Exports accounted for almost 31.88 trillion won ($30.06 billion), or 66.6 percent of the total sales that year.

“GS Caltex was able to become one of the world’s leading oil exporters of petroleum products, even though Korea does not produce a single drop of oil,” said a company official. “The only reason is because we kept diversifying the business by investing in facilities, while closely watching changes in the industry.”

Since its establishment as Korea’s first private oil company in 1967, GS Caltex has been building on its core business areas of petroleum, petrochemicals, base oil and lubricants. The company currently supplies one third of Korea’s oil energy.