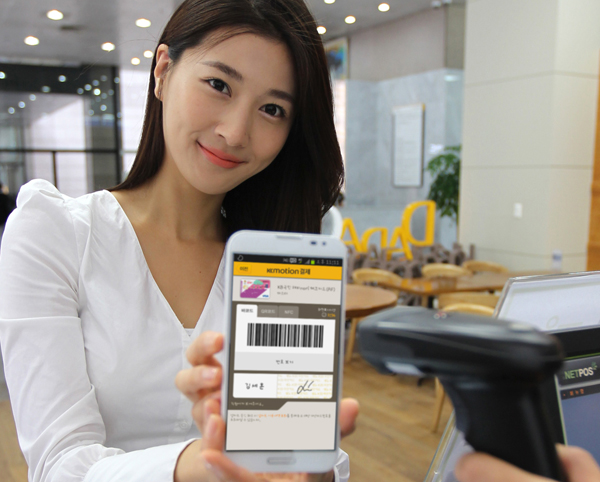 A model poses with KB Kookmin Card’s K-Motion app on her smartphone. KB Card aims to lead the mobile payment market with its new app. Provided by the company

Once, fat wallets were a symbol of wealth. But no longer. With the ubiquitous use of smartphones, payment methods have also evolved in a smart way, and K-Motion, a mobile app card recently released by KB Kookmin Card, is leading the trend.

K-Motion enables quick and easy mobile payment, removing the need to carry plastic cards. To register, users install an application on their smartphones from the Google Play or Apple App stores, register their cards, choose a payment password and give their signature. Afterward, they can use the application to make purchases just by typing in their chosen password.

“We aim to become a leader in the mobile payment market,” said KB Card through a press release. “K-Motion’s services can be characterized in three words: simple, slim and safe.”

The purchasing process is straightforward, which is what makes K-Motion “simple,” while the size of customers’ wallets become “slim” through use of the app. KB Card also stresses that transactions are “safe” as the mobile app does not save the customer’s card number - the payment is made with a single-use number that is renewed with every purchase.

KB Card has revealed that K-Motion has lured more male users than female users so far, at 52.5 percent and 47.5 percent, respectively, while the number of K-Motion users in their 30s accounts for 41.3 percent of the total number of users; the largest use by any age group.

Men in their 30s contributed most to K-Motion’s popularity, with 22.4 percent of the app’s users being in this age bracket. And though younger people are more accustomed to using the savvy mobile app, 24.3 percent of users are older than 40.

“We will strengthen marketing for K-Motion to enable more customers to enjoy the innovative mobile payment system,” said KB Card through the press release. “We will continue to expand the stores that accept its use, and increase the variety of services.”

The K-Motion app can currently be used in about 8,700 stores across the country, including at 7-Eleven and Buy the Way.