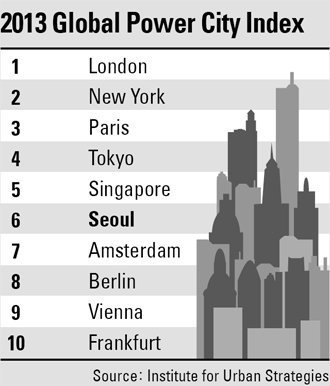 Seoul ranked sixth out of 40 cities in urban competition in the latest Global Power City Index, a ranking by a Tokyo-based think tank.

The Institute for Urban Strategies said that it measures a city’s “comprehensive power to attract creative people and excellent companies from around the world,” based on indicators such as market size, research and development infrastructure, cultural attractiveness and livability.

Seoul ranked sixth overall last year, up one spot from 2011, when it placed seventh.

At the bottom of the list, Cairo ranked the worst for urban competition, just below Mumbai, India. Sao Paulo, Brazil, took the third-to-last spot.

The think tank noted that Korea’s high economic indicators gave it an edge over most other nations. “Seoul has moved up from 13th place last year to No. 8 this year [in that category]. This is due to increased scores for wage level, and the level of political, economic and business risk,” it said.

The index also cited the city’s advanced transportation system as a factor that helped to enhance its urban competition. Seoul, London, Istanbul and Paris all received high scores for the quality of their international airports, but rated poorly when it came to flight punctuality.

The index is put together by a committee of experts and professors from various academic and research institutes, including The Mori Memorial Foundation. The survey also undergoes a third-party peer review to validate content and make necessary revisions.