A more sensitive thunder god returns to save the 9 worlds

A more sensitive thunder god returns to save the 9 worlds 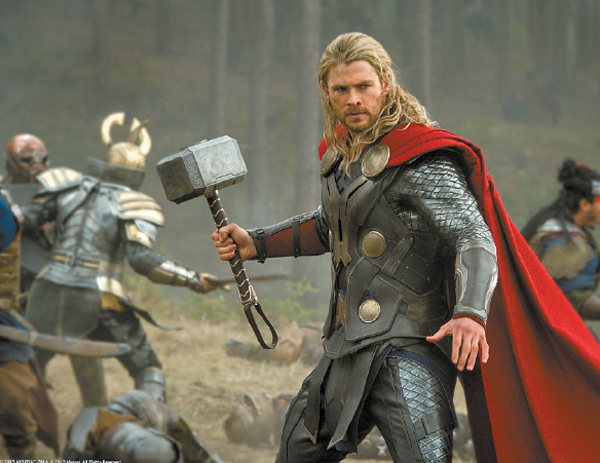 The Norse god of thunder is back for more, this time trying to save the nine worlds in “Thor: The Dark World.” Provided by Sony Pictures Korea

Two years after Marvel Studios introduced us to its first divine superhero, and a year after one of the biggest superhero team-ups of all time in “The Avengers,” the story of Thor continues.

The chiseled Nordic god with the red cape is back with his trusty Mjolnir (a boomeranging hammer), his girl Jane (Natalie Portman) and his troublesome half-brother Loki (Tom Hiddleston).

“Thor: The Dark World” promises more drama than the prequel, with Thor (Chris Hemsworth) tapping into his sensitive side as he tries to work out where he stands with his half-brother, who has been locked up for trying to destroy the world in earlier adventures.

Thor must also decide what to do about his inter-world romance with his scientist-girlfriend Jane as he saves multiple worlds - again - while trying to be a good, obedient son.

Two years after Thor leaves Earth, a new threat arises, this time from Malekith the Accursed - a dark elf from Svartalfheim who wants to dominate all nine realms of the Asgardian universe.

As the title suggests, there is darkness aplenty, but there are some comedic moments, too, especially when Jane travels to Asgard and meet Thor’s parents for the first time.

Loki, being the bitter, jealous, cynical underdog, delivers some witty remarks and magic spells that are laugh-out-loud funny, as the Thor-Loki pair show that no one is exempt from sibling rivalry.

Then there are the tear-jerking moments, as Thor suffers some blows to his family. Despite all that has happened, Thor must put his trust in Loki once more if he wants to save everything.

The nine kingdoms, and in particular Thor’s Asgard, are breathtakingly beautiful - it’s one of the movie’s strongest points, although also disappointing in that we don’t get to see more.

Perhaps having a new director at the helm helped set the tone for greater emphasis on Asgard. Rather than thespian Kenneth Branagh, this time, the film is led by Alan Taylor, best known for his work on the HBO series “Game of Thrones.” Taylor gives this new film more of a “Lord of the Rings” vibe (complete with Uruk-hai look-alikes), and every minute in Asgard is such a treat for the eyes.

However, the story then moves to present-day London, where the battle between Thor and the evil elf lord eventually ends up in something of an anti-climatic finish.

But a lot happens along the way, and you really have to watch attentively if you want to stay on top of where the heroes are and what’s happening.

If the first Thor movie focused on the Norse god as a fish-out-of-water, trying to understand today’s human world, this time it’s the other way around. Hemsworth proves that he’s really grown into his character, and every gesture and inflection of his voice screams “god.”

While the brothers’ thorny relationship is intriguing, it’s not enough to keep viewers focused for a whole two hours. And as Thor transitions from one world to the next - nonstop at one point- you can’t help but wonder what is happening in Asgard.