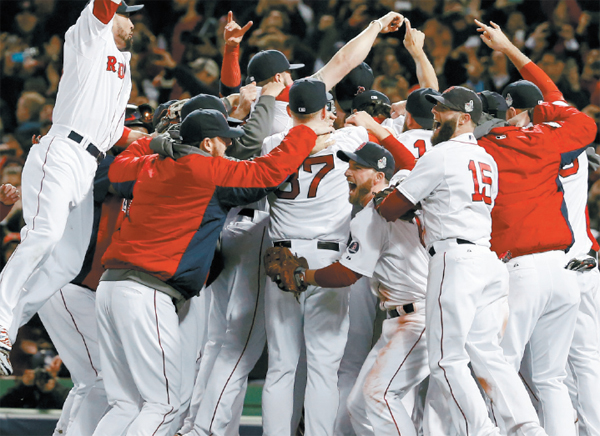 Boston Red Sox players celebrate after beating the St. Louis Cardinals in Game 6 of the World Series on Wednesday in Boston. [AP/NEWSIS]

BOSTON - David Ortiz and the Boston Red Sox capped their remarkable turnaround by beating the St. Louis Cardinals, 6-1, in Game 6 on Wednesday to win their third World Series in 10 seasons, clinching the championship at Fenway Park for the first time since 1918.

There hasn’t been a party like this in New England for nearly a century.

Turmoil to triumph. Worst to first.

Shane Victorino, symbolic of these resilient Red Sox, returned from a stiff back and got Boston started with a three-run double off the Green Monster against rookie sensation Michael Wacha.

John Lackey became the first pitcher to start and win a Series clincher for two different teams, allowing one run over six and two-thirds innings 11 years after his Game 7 victory as an Angels rookie in 2002.

“Maybe they won’t have to go another 95 years,” said John Farrell, a champion in his first season as Boston’s manager.

With fans roaring on every pitch and cameras flashing, Koji Uehara struck out Matt Carpenter for the final out. The Japanese pitcher jumped into the arms of catcher David Ross while Red Sox players rushed from the dugout and bullpen as the Boston theme “Dirty Water” played on the public-address system.

And the Red Sox didn’t have to fly the trophy home. For the first time since Babe Ruth’s team back in 1918, Boston won the title at Fenway Park. The 101-year-old ballpark, oldest in the majors, was packed with 38,447 singing, shouting fans anticipating a celebration 95 years in the making. “We have a lot of players with heart. We probably don’t have the talent that we had in ’07 and ’04, but we have guys that are capable (of staying) focused and do the little things,” said Ortiz.

There wasn’t the cowboy-up comeback charm of “The Idiots” from 2004, who swept St. Louis to end an 86-year title drought. There wasn’t that cool efficiency of the 2007 team that swept Colorado. This time, they were Boston Strong - playing for a city shaken by the marathon bombings in April.

After late-season slumps in 2010 and 2011, the embarrassing revelations of a chicken-and-beer clubhouse culture that contributed to the departure of manager Terry Francona, and the daily tumult of Bobby Valentine’s one-year flop, these Red Sox grew on fans.

Across the Northeast, from Connecticut’s Housatonic River up to the Aroostook in Maine, Boston’s eighth championship will be remembered for all the beard-yanking bonding.

Ortiz, the only player remaining from the 2004 champions, was the Most Valuable Player after a World Series reminiscent of Ruth. He batted .688 (11 hits for 16 at bats) with two homers, six RBIs and eight walks - including four in the finale - for a .760 on-base percentage in 25 plate appearances.

Even slumping Stephen Drew delivered a big hit in Game 6, sending Wacha’s first pitch of the fourth into the right-center bullpen.

By the time the inning was over, RBI singles by Mike Napoli and Victorino had made it 6-0, and the Red Sox were on their way.

Among the players blamed for the indifferent culture at the end of the Francona years, Lackey took the mound two days short of the second anniversary of his elbow surgery and got his first Series win since the 2002 clincher. He pitched a shutout into the seventh, when Carlos Beltran’s RBI single ended the Cardinals’ slump with runners in scoring position at 0 for 14.

Junichi Tazawa came in with the bases loaded and retired Allen Craig on an inning-ending grounder to first. Brandon Workman followed in the eighth and Uehara finished.

Boston was a 30-1 underdog to win the World Series last year but joined the 1991 Minnesota Twins as the only teams to win titles one season after finishing in last place. AP