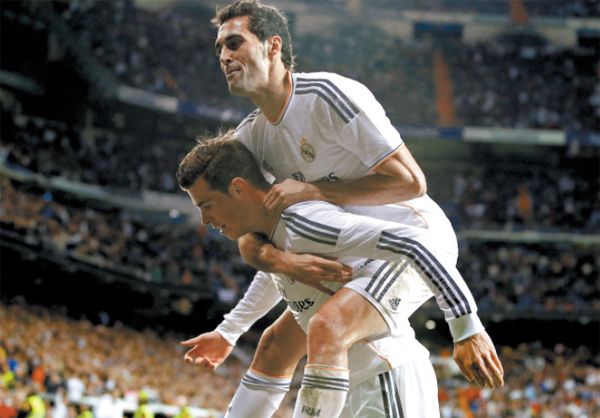 MADRID - Gareth Bale finally made his mark at Real Madrid on Wednesday, only for Cristiano Ronaldo to upstage his two-goal performance with a hat trick in a 7-3 victory over Sevilla.

The Welshman celebrated his first league start at the Santiago Bernabeu by scoring twice and setting up two more.

But it was Ronaldo who responded to FIFA president Sepp Blatter’s mocking of the Portugal forward with a celebration slight of his own as he passed Ferenc Puskas with his 157th league goal for Madrid, the fifth-best in the club’s history.

Karim Benzema capped the 10-goal thriller with his second goal, while Ivan Rakitic scored twice for Sevilla but sent a penalty - the third of the match - into the stands with a hat trick beckoning. Carlos Bacca also scored for the visitors.

Bale, the world’s most expensive footballer, helped Madrid rebound from Saturday’s 2-1 loss at league leader Barcelona to stay within six points of its rival.

Earlier, Almeria rallied from a goal down to beat Valencia 2-1 and record its first win of the season.

Madrid got off to a flying start thanks to Bale, who was picked out by Benzema inside the area for a rising shot into the top left corner in the 13th minute.

Ronaldo displayed uncharacteristic selflessness on the field by allowing Bale to take a 27th-minute free kick, and the Wales forward saw his shot deflect off the defensive wall and beat goalkeeper Beto to make it 2-0.

Ronaldo stepped up to slot home a 32nd-minute penalty after Fernando Navarro barged into Isco. The former world player of the year celebrated with a military salute, an apparent reference to Blatter’s recent mocking of him - when the FIFA president portrayed the Portugal forward as an army commander.

Referee Teixeira Vitienes then awarded Sevilla a questionable penalty as Sergio Ramos tussled with Figueiras inside the area, and Rakitic stepped up to score from the spot.

Bacca made it 3-2 before halftime, but Benzema soon began extending Madrid’s lead after the break. The France striker showed his class by gathering Bale’s cross in the 53rd minute and calmly slotting low into the net.

Ronaldo became the first player in league history to score a hat trick against the same team in four consecutive seasons. AP