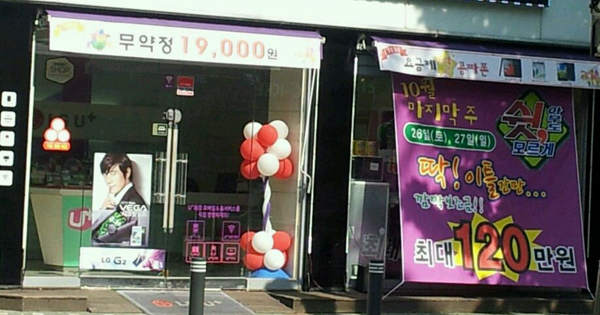 Last weekend, the reporter visited a mobile phone sales shop near Gangnam subway station in southern Seoul to buy an iPhone 5S and had to think hard whether to change the decision after the employee at the shop suggested a deal.

Subsidy competition is heating up again.

According to the Korea Communications Commission and the mobile carriers yesterday, the number of phone number changes, used as a gauge of defections from one operator to another, hit a year-high of 128,176 for a Friday to Sunday period last weekend. On the previous weekend, the figure was 59,957. On Tuesday, 67,419 users changed numbers. The KCC regards it as overheated competition when the daily number change is more than 24,000. 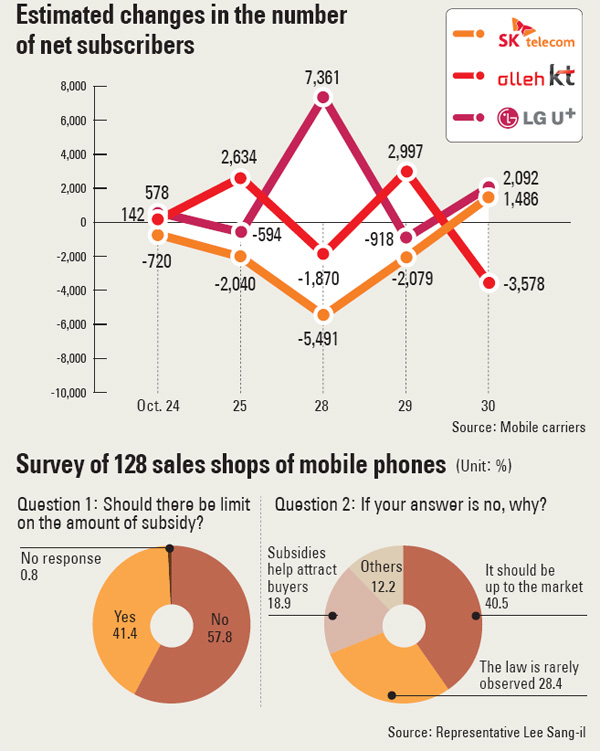 Mobile operators deny it, but market observers say the number of changes suggest that the companies are giving out huge subsidies. Indeed, some of the biggest mobile phone sales shops in Seoul put up a “hidden subsidy” notice on their windows over the past week. Some places advertise “Minus Phone,” for example, which comes with a 1.05 million subsidy on a 950,000 won handset.

Although subsidies eat away at the profits of the operators, the companies can charge more for monthly subscriptions and usage fees.

The mobile carriers are also seeking to clear old models off the shelves to make way for new products. As the end of the year approaches, companies are also pressed about meeting sales targets.

In the past, the operators mainly sold overly-subsidized phones online to avoid getting caught red-handed by the watchdog officials. But selling online has also become difficult because of so-called phoneparazzis, or those getting rewards for reporting online sales of over-subsidized phones

Many shops in recent days prefer selling them in person, because if the customers pay the price of the phones on the spot, with the help of the subsidy, the subsidy payment does not remain on the monthly bill.

As more shops are giving subsidies, the KCC said last week it was launching spot inspections.

Meanwhile, companies are playing the blame game. SKT and KT point to LG U+, which does not sell the iPhone 5S. Since the release of the iPhone 5S, many LG U+ subscribers have moved to the other two carriers. SK and KT said LG U+ started to raise subsidies to stem the outflow. Indeed, the number of people who subscribed with numbers given by LG U+ over the past week stood at 8,519. During the same period, 8,844 subscribers to SKT and 325 KT subscribers changed their numbers. LG U+ refutes the claims. The company said the subsidy is part of SK and KT’s efforts to stem the outflow to LG U+.

An official of one of the three companies said on condition of anonymity that all three get involved, no matter who starts it.

Some consumers put the blame on the government’s subsidy regulation, but market experts say the subsidy will eventually lead to a bigger burden on consumers. Lee Sang-il, a lawmaker with the ruling Saenuri Party, suggested that the government adjust the subsidy ceiling according to market conditions.

“Rather than focusing on the existing regulation itself, the government needs to come up with more effective policies that could stabilize the mobile market,” Lee said.